The Crisis This Time 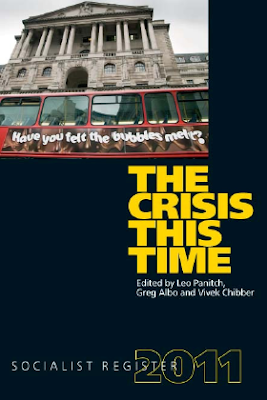 Crises have a way of clarifying things. Remember when we were told, again and again, by Wall Street whiz kids and Ivy League economists, that freeing up the economy was the road to stability? That the solution to market instability was – to free up the markets even more? That the obscene salaries and perquisites being handed to CEOs and financial analysts were worth it because they were bringing prosperity to all? To question these nostrums, however mildly, was to invite ridicule and abuse. Then, after those fateful weeks in Autumn 2008, as one Wall Street titan after another came to the brink of collapse or collapsed altogether, we witnessed the impossible. Virtually overnight, the warm embrace of the market turned into a suffocating incubus. As workers lost jobs by the hundreds of thousands, pensions went up in a puff of smoke, life savings vanished, families lost their homes, the grim reality of capitalism, the remorseless logic of the profit motive, became impossible to ignore. The major capitalist economies fell into an abyss, the like of which had not been seen since the Great Depression. And for the first time in decades, the mountainous piles of books, essays, and stories produced to defend the free-market mania started to appear as nothing more than smoke and mirrors.
It has been three years since the crisis began, and there is no clear end in sight. Whether or not we are at the beginning of the first Great Depression of the 21st century remains to be seen. But what recovery there has been is halting and precarious, and we now live with the possibility of long-term stagnation. And make no mistake, for millions of workers across the world it has meant what crises always do – coming face to face with the fact that in capitalism, it is profits that matter, not people.

The Left has always recognized that crises mean, first and foremost, untold suffering by the most vulnerable sections of society, the scars of which remain long after the crises abate. This is why serious socialists have never welcomed economic breakdown. But precisely because of their disruptive effects on business as usual, economic crises also present political opportunities. In previous crises, such as in the Great Depression, and even in the late 1960s and 1970s, economic dislocation became the occasion for massive social explosions and gains for the working people.

Are we positioned now to make comparable – or indeed any – advances? It is possible, but we need to be honest about our capabilities. Over the past decades, it is the Right that has gone from strength to strength. For working people, the grim reality for over a generation has been a steady dismantling of the institutions that they built up in the second half of the twentieth century. Across the developed world, social democracy has morphed from representing working-class interests to becoming the guardian of business profits; in the global South, the visions of national liberation and socialism seem like dim echoes from a distant past. The Left is today the weakest it has been since the defeat of the Paris Commune.

Indeed, since the crisis began, it is the ruling classes, not the labour movements, that have seized the crisis as an opportunity. Even while the public stands disgusted with the speculative orgy that neoliberalism unleashed, even while the mythology of market fundamentalism has been discredited, and even while public sentiment is hostile to the bank bailouts – the response of capitalist states has been to shore up, however they can, the very model that brought the economy to ruins. In the very week in late June 2010 when we were writing this preface, the leaders of the G-20, meeting in Toronto, declared that their holding fast to free markets since the onset of the crisis had been ‘the right choice’. And they pledged to ‘renew for a further three years… [their] commitment to refrain from raising barriers or imposing new barriers to investment or trade… [and] to rectify such measures as they arise’. They also promised to ‘minimize any negative impact on trade and investment of [their] domestic policy actions, including fiscal policy’. It appears we are entering a new age of austerity. This portends a further assault on trade unions and the social entitlements of the working classes.

So in this conjuncture we need to have a sober appreciation of our weakness. Whatever else goes into revitalizing the Left, surely one part of it will be the development of an adequate analysis of the crisis, in its political and economic dimensions. On this score, Marxist political economy stands out as having built the analysis of crisis and instability into its very core. This is precisely why past crises have been the occasion for a ‘return to Marx’. It is not altogether surprising that Marx’s Capital has rocketed up the sales charts, and we see his familiar bearded visage on the cover of such establishment magazines as Foreign Policy.
We are devoting two volumes of The Socialist Register to analyzing ‘the crisis this time’. This one, our 47th, encompasses several themes, including putting the crisis in historical and theoretical perspective, analyzing the centrality of financialization in it and surveying its dimensions in the US, Europe, Japan and South Africa. The volume also examines the impact of the crisis on the working class both socially and politically, while demonstrating that, in spite of its instabilities, ‘exit strategies’ are geared to revitalizing neoliberal capitalism.

Next year’s volume will extend the geographical focus to China, the Middle East, Eastern Europe and Latin America, and deepen the analysis of the epicentre of the crisis in the USA. It will further explore the Left’s response to the crisis so far, and the linkages between the economic crisis and the ecological crisis and the crisis of the city. This will set the stage for the 49th volume of the Register, which will focus entirely on socialist strategy and organization for our time.

Many of the contributors to our two volumes on the crisis presented drafts of their essays at a highly stimulating workshop at York University in February 2010, and we want to thank Frederick Peters, Khashayar Hooshiyar, Adam Hilton, Aidan Conway, and Tammy Kovich for their role in making this possible. Our associate editor, Alfredo Saad-Filho, made a particularly important contribution in helping us plan both crisis volumes. We want to thank all of our contributors, especially for their responsiveness to our comments on their essays, while pointing out to our readers that neither they nor we necessarily agree with all of the diverse approaches to the crisis in the volume. We thank Louis Mackay for his cover design. And we warmly express our gratitude to Adrian Howe and Tony Zurbrugg, our colleagues at the Merlin Press, and especially to Alan Zuege, now the Register’s assistant editor, for their creativity and hard work in the preparation of this volume. The work they all have put into making the Register available online, including the entire Register archive, has been indispensible.

With the publication of his capstone volume, Morbid Symptoms: Health under Capitalism, The Socialist Register 2010, Colin Leys stepped down as co-editor to become an associate editor. We are extremely grateful for his tremendous help in editing this volume, which only puts into sharper relief his brilliant editorial skills and intellectual leadership over the past 12 years. Amidst the spread of market-driven politics, Colin’s unwavering socialist commitment has been a model for Left intellectuals everywhere. We will continue to count on his guidance over the next phase of the Register’s development.