Capitalism and the Curse of Energy Efficiency

The Return of the Jevons Paradox 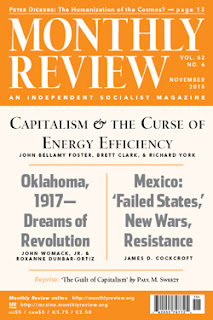 John Bellamy Foster, Brett Clark, and Richard York
Monthly Review, November 2010
The curse of energy efficiency, better known as the Jevons Paradox—the idea that increased energy (and material-resource) efficiency leads not to conservation but increased use—was first raised by William Stanley Jevons in the nineteenth century. Although forgotten for most of the twentieth century, the Jevons Paradox has been rediscovered in recent decades and stands squarely at the center of today’s environmental dispute.

The nineteenth century was the century of coal. It was coal above all else that powered British industry, and thus the British Empire. But in 1863 the question was raised by industrialist Sir William George Armstrong, in his presidential address to the British Association for the Advancement of Science, as to whether Britain’s world supremacy in industrial production could be threatened in the long run by the exhaustion of readily available coal reserves.1 At that time, no extensive economic study had been conducted on coal consumption and its impact on industrial growth.