Bolivia: Cancun should not be Copenhagen Part II

Cancun Climate Summit: Even before the summit begins, the World Bank and corporate governments are scheming, targeting forests for carbon credit scams and the Earth for more pollution
By World Peoples Conference on Climate Change and the Rights of Mother Earth
Photo 1: IEN Bolivia: Photo 2: Michelle Cook, Navajo/Bolivia 2010 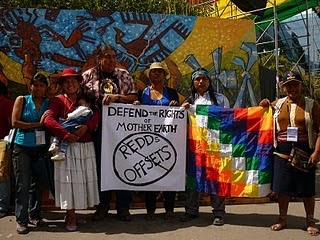 CANCUN, Mexico -- (November 27, 2010) – At the next meeting of the Conference of Parties to the United Nations Framework Convention on Climate Change (COP 16), which begins November 29th in Cancun, Mexico, the 192 member states must agree on a second commitment period of the Kyoto Protocol.
However, on November 24th, the President of the Ad-Hoc Working group on Long-Term Action issued a new document that attempts to legitimize the “Copenhagen Accord,” which the United Nations merely “took note of” last December in Denmark.
This new document put forth by the President of the Ad-Hoc Working Group, instead taking into account the proposals of all the parties put forth during the process of negotiations, downplays the need for a second commitment period of the Kyoto Protocol. It was developed under no mandate from the parties, and promotes emissions reductions by all countries without clearly distinguishing between developed countries and developing countries, leaving aside the fundamental principle of “common but differentiated responsiblities” among nations.

Like the Copenhagen Accord, the document promotes a stabilization of the rise in temperature to 2 degrees Celsius, ignoring the proposals of those who have asserted that the temperature increase should be limited to 1 or 1.5 degrees Celsius. It eliminates all of the proposals of the World People’s Conference that took place last April in Bolivia, such as the recognition of the Rights of Mother Earth and the full application of human rights principles, including the rights of indigenous peoples and climate migrants, in all climate-related actions. Other proposals included the establishment of an International Climate Justice Tribunal and the use of war and defense budgets to by developed countries to address the problem of global warming.

The new document goes even further than the “Copenhagen Accord” by inviting the World Bank to administer the new climate fund, and limiting financing for climate change to 1 billion dollars – ignoring the proposal of the G77 and China to dedicate 1.5% of the GNP of developed countries (the equivalent of 6 billion dollars) to financing climate change and the proposal of Bolivia to use 6% of of the GNP of developed countries.

The new document treats forests simply as carbon sinks and does not guarantee the full participation of indigenous peoples and local communities in forest management.

Regarding technology transfer, said text does not recognize the proposal that intellectual property rights should not be an obstacle to effective access to technology needed by developing countries to face climate change. 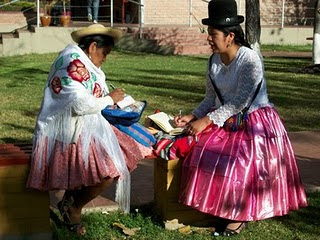 On the topic of adaptation, it does not consider the institutional framework proposed by developing countries to implement adaptation actions using new and additional sources of financing beyond Official Development Assistance (ODA).

In sum, the new text does not reflect the various proposals of the G77 and China, nor does it take into account the proposals of the World People’s Conference on Climate Change and the Rights of Mother Earth, which represent the demands of the more than 35,000 delegates that gathered last April in Cochabamba, Bolivia.

The Plurinational State of Bolivia believes that it is essential to uphold the multilateral process at COP 16 and to avoid the emergence of documents that have not been negotiated, as was the case last year in Copenhagen.
Posted by Next Year Country