This review of Sparking a Worldwide Energy Revolution appears in the current issue of Red Pepper magazine. 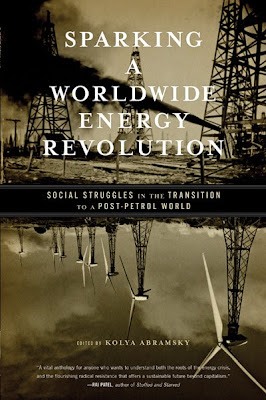 Can ‘green capitalism’ really save the planet? Leaders of the G20 countries certainly think so. They insist that through the market in renewable energy, new technological solutions and regulatory reform, it is possible to achieve both major reduction in CO2 emissions and save the global economy.

Unfortunately, as Sparking a Worldwide Energy Revolution sets out to explain, there are one or two problems with this rosy picture of capitalism solving climate change on its own terms. To begin with, regulation has been an almost completely failure, as we saw with the collapse of the talks last year in Copenhagen and more recently in Bonn. It has failed not least because the bigger problem is the most obvious one: a system of production based on endless growth and expansion is completely incompatible with a long term reduction in energy consumption.

Technological fixes such as carbon capture or agrofuels, which essentially seek to maintain consumer demand and continued fossil fuel dependency, are an appealing way for rich nations to avoid making hard choices about their unsustainable consumption. Meanwhile, the growing energy crisis is resulting in huge profits for oil companies.

The result has been rising prices for basic necessities, the kind of environmental disasters we see in Nigeria and the Gulf of Mexico and a greater number of economic refugees, who are either exploited as cheap labour or excluded entirely from the world’s centres of wealth. From this perspective, the battle to shape the transition to post-petrol world is just as much about class as any of the struggles that have preceded it.

Sparking a Worldwide Energy Revolution is not, as it confesses, a “book of soundbites”, not least because there are no easy answers. At more than 650 pages spread over 59 chapters, it is also a book that is almost impossible to read from cover to cover. Its real strength is as a comprehensive reference guide to the huge range of interconnected issues facing climate activists and to the struggles for the control of energy taking place around the world.

Its mix of essays by frontline organisations, academics and campaigners means that anyone looking for arguments about whether a ‘green new deal’ is really possible, or how a just transition for energy-sector workers might be achieved, or what the impact of privatised ownership of new technologies has been on indigenous communities, will find concise and thoughtful contributions.

Together, they help explain why long-term solutions are indeed possible, but ‘green capitalism’ certainly isn’t one of them. An essential book for the committed climate campaigner, then, but probably too dense and too overwhelming for anyone new to the subject.

Sparking A Worldwide Energy Revolution: Social Struggles in the Transition to a Post-Petrol World - Kolya Abramsky [editor] was published in July by AK Press.
Posted by Next Year Country