Our Last Chance to Save Humanity? 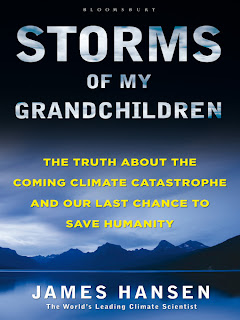 Book Review- James Hansen, Storms of My Grandchildren: The Truth About the Coming Climate Catastrophe and Our Last Chance to Save Humanity (New York: Bloomsbury Press, 2009), 320 pages, $25.00, hardcover.

James Hansen, one of the world’s most distinguished climate scientists, has written an important book about the threat posed by climate change. The title, Storms of My Grandchildren, refers to the prediction of more powerful and more damaging storms in a warmer, future earth. Subtitled The Truth About the Coming Climate Catastrophe and Our Last Chance to Save Humanity, the book is written for a lay public and is certain to be controversial.

Hansen is a pioneer in modern climate science. After receiving his doctoral degree in 1967, he moved to the NASA Goddard Institute for Space Studies, where he spent his entire career, and rose to the rank of director. He has received many honors and awards, most recently the 2010 Blue Planet Prize, the Japanese equivalent of the Nobel Prize. After studying the then-unknown atmosphere of Venus for a decade, he turned to the study of the earth’s atmosphere. His expertise in radiative transfer (of energy in the atmosphere) enabled him to develop some of the first computer models of the earth’s climate. Hansen did not start out as an environmental spokesman. He is a registered political independent, who contributed to the Gore/Lieberman campaign in 2000, and to Obama in 2008. He has indicated that he might back New York City mayor Michael Bloomberg, a Republican, in the future.


The Censorship of Science
Hansen first came to public attention in 1988, when he testified before Congress that he was “99% confident” that the earth was warming because of human-made greenhouse gases. He called for Congress to stop waffling on the issue. Less than a year later, he testified again, this time before then-Senator Al Gore’s committee. When the White House, under George H.W. Bush, altered Hansen’s written testimony in order to muffle his conclusions about the dangers of global warming, Hansen complained in public of the censorship, which resulted in an uproar. White House Chief of Staff John Sununu attempted to have Hansen fired, but Republican Senator John Heinz intervened to save Hansen’s job. These two incidents raised the public profile of the otherwise reticent Hansen, making him a hero to many scientists.