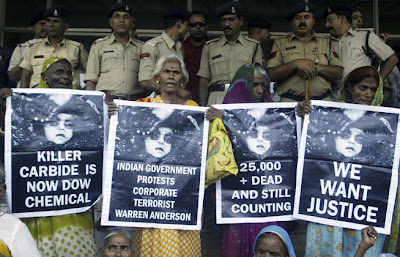 Twenty-five years ago, a runaway chemical reaction in a tank at a Union Carbide (UC) pesticide factory created a poisonous gas which, unimpeded by the factory’s safety devices, spewed out over the sleeping population of the Indian city of Bhopal. Amnesty International estimated that seven thousand to ten thousand died in the catastrophe’s first three days, and that, by 2004, another fifteen thousand died. Prior to Bhopal, concern over toxic chemicals was confined to long-term or chronic effects on human health and the environment. Bhopal, however, showed that the manufacture, storage, and use of toxic chemicals also posed a major, acute risk to the safety of those working in and living around petrochemical plants and complexes.

Bhopal has become the prototype of chemical catastrophes, against which all others are compared. Themes that constantly reappear in accounts of these catastrophes—corporations denying responsibility and blaming workers and victims; critics highlighting corporate responsibility for decisions resulting in faulty equipment; inadequate maintenance; staff and training cuts; and neglect by state regulators—can all be found in Bhopal.