Requiem for a Species? 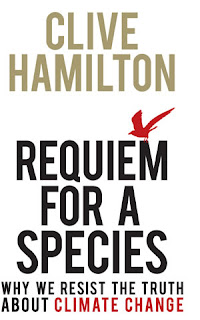 Clive Hamilton's pessimism about climate change activism relies on the assumption that individual consumers are to blame, but capitalism is the elephant in the room argues Elaine Graham-Leigh.(Clive Hamilton, Requiem for a Species. Why We Resist the Truth about Climate Change, (Earthscan 2010)

We all know that we cannot fully stop climate change. Global warming is happening; the goal of climate campaigners is to limit that warming to 1.5oC, avoiding the most catastrophic consequences and crucially, the tipping points after which runaway global warming would be beyond anyone’s power to halt. Clive Hamilton’s depressing message is that we’ve failed. We are facing a four-degree world. This is only a certainty, however, if we accept Hamilton’s political assumptions.

Hamilton does not attempt to list all the consequences of 4oC warming, picking out just 10m sea level rises, mass extinctions of species and heat-waves like that which Australia experienced in February 2009. The temperature on that occasion in Melbourne reached 46.4oC and wildfires killed 173 people. And this list is one of the better-case scenarios. Hamilton recounts how, at a conference in Oxford in September 2009, Kevin Anderson, director of the Tyndall Centre, said that we would limit warming to 4oC ‘if we’re lucky’ (p.196). Little wonder the participants at the conference found by the end that they were having trouble sleeping, as the message seemed to be that ‘the future looks impossible’ (p.193).

This for Hamilton is likely to be our future because avoiding that level of warming would require very significant cuts in greenhouse gas emissions very quickly. Emissions would have to peak in 2015, and developed countries would have to achieve cuts of around 25% - 40% by 2020. This, he says, is impossible, and even a 2020 peak in emissions seems out of the question. Hamilton presents this conclusion as simply common sense, something that the ‘more savvy’ climate scientists ‘know enough about the world to understand’ (p.196). This pessimism is however inextricably linked to the arguments here about why reductions in greenhouse gas emissions have not been achieved. It is after all a question of political will whether the required cuts in emissions are made.

Hamilton is part of a long tradition of writers, going back at least fifty years, who identify the pursuit of continual economic growth as the source of environmental destruction. He opens with an efficient discussion of the resistance of governments to the adoption of environmental measures which might damage growth, including an interesting discussion of the reception of the Stern report of 2005. While this section concentrates on political leaders and economists, it becomes clear that they are not, in Hamilton’s view, the source of the obsession with growth. Politicians might be ‘driven to defend’ growth, but we are all the ones driving them, as ‘growth provides the raw material from which we increasingly construct our sense of who we are’ (pp.64-5).

In this argument, ‘we’ are responsible for climate change: we insist on $200 trainers and ￡800 whirlpool baths; we engage in wasteful consumption and are not prepared to give it up. It may not be entirely our fault – Hamilton has a chapter on ‘disconnection from nature, drawing on the works of ‘deep ecologists’ like Arne Naess – but the overwhelming impression is that ‘we’ are squarely to blame. Even when the issue appears to be the failure of politicians to act, it is still really our fault, as we only have the politicians we deserve: ‘the passivity of the public has allowed our political representatives to become more and more dominated by a professional class of power-seeking individuals who stand for little other than self-advancement’ (p.224).

The elephant in the room here is capitalism. Hamilton seems to view production and its environmental consequences as entirely driven by individual consumption decisions. There is no indication here that individual consumption takes place within a system in which capitalist profits require continuous growth. His understanding of climate change as an expression of mentalities also implies that changing those mentalities is part of the solution. This might seem a reasonable response until you try to explain exactly how ‘reconnecting to nature’ will help us when facing wildfires or floods.

Hamilton’s understanding of climate change as arising from individual behaviours, rather than being a consequence of capitalism’s capacity for environmental destruction, does not sit easily with a positive view of activism. This is perhaps the root of his opinion that, with 5-10 years to go, the chances of sufficient emissions reductions by 2015-2020 are zero. He does however seem to appreciate the role of campaigning, if not to limit climate change, at least to restrict the undoubted injustices coming our way as large parts of the world become uninhabitable. Indeed, on the last two pages, Hamilton extols the Greenpeace protestors, who scaled the Kingsnorth power station and were acquitted of criminal damage on the grounds that they were trying to prevent the greater damage of climate change. He calls for more civil disobedience of this kind. But that we have to wait for this until the penultimate page is perhaps the greatest weakness of this book.

The terrifying reality of catastrophic climate change is a call to arms. We have to continue to fight to overturn the common-sense view that there is nothing we can do to change the political realities of a system which has so far failed to respond. And we have to put climate change at the heart of the movement to say that we won’t pay for their crisis. I don’t know that Hamilton would necessarily disagree with this. The problem is that his understanding of climate change as a matter of individual consumption means that he has 224 pages worth of material on the problem we face, and only one and a half on what we should actually do about it.
Posted by Next Year Country