Climate movement — what next? 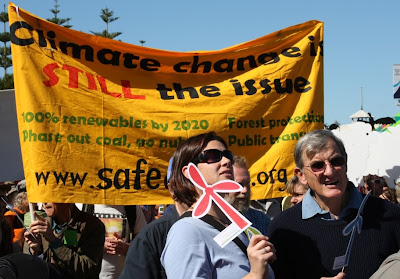 Green Left Weekly’s Simon Butler asked five Australian climate activists for their thoughts on the current state of the movement.

Phillip Sutton is the convenor of Melbourne’s Climate Emergency Network and co-author of the 2008 book Climate Code Red.

Adam Lucas is coordinator of Beyond Zero Emissions Sydney and lectures in the Science and Technology Studies Program at the University of Wollongong.

Gemma Weedall is co-convener of the Adelaide branch of the Socialist Alliance and attended the April World People’s Conference on Climate Change and the Rights of Mother Earth, held in Cochabamba, Bolivia.

*****
How has the climate action movement fared since the failure of the Copenhagen climate talks? Can you see any weaknesses in its strategy or tactics that need to be addressed?

Philip Sutton: The failure of the Copenhagen negotiations, and indeed the failure to get decisive action on climate from governments in Australia, is both devastating (given that we are heading rapidly into catastrophic climate change conditions) and yet was always highly probable (because, to solve the climate problem, we have to do nothing less than restructure the whole world economy).