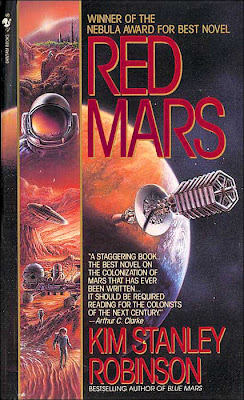 A lot of socialists have a yen for science fiction. I mean, apart from the fact that we are often geeks anyway, science fiction almost always tries to imagine an alternate future. It extrapolates from current situations, social and technological, and tries to predict what could be.
That’s REALLY useful, because honestly, since Marx, socialists haven’t been very good at actually describing what a socialist future could be like, except in terms of negatives: there won’t be sexism, there won’t be oppression based on race, or sexuality, or ethnicity or culture. There won’t be material inequality: the productive means of the world will be carefully organized so that everyone has a decent material existence that also works with what is sustainable on this earth.
But that is a pretty amorphous description. How will the economy be organized? How will people live together? What new technologies will exist? Really, wouldn’t it be easier to recruit if we had something to point to as a model?
Marx, when asked something of the sort, said (according to International Socialist Review associate editor, Joel Geier; he once looked it up for me in Marx’s very voluminous correspondence), “we cannot make the recipes of the future until we are in the kitchen of the future” - which is as awesome a gendered Marx quote as I have ever come across.
So we tend to hopefully look at science fiction as one place one might see glimpses of these future recipes. I know that I liked most versions of Star Trek for that reason (never mind the military organization of it – shhh!)
But what science fiction does NOT do, which we as socialists are better at, is describe how our current society gets from here to there. That period of transition is left very vague, almost always. Edward Bellamy, in writing his classic Looking Backward, referred glancingly to riots following an economic crisis. He was an early socialist and a utopian, so he at least felt some responsibility to hint at an explanation for his re-awakened 19th century protagonist.

Most science fiction authors don’t. For many of them, the invention of technologies themselves somehow solve the problems of capitalist social relations, or else they are out and out libertarians who revel in how the future will have even more atomized individualism and MORE unfettered capitalism (I’m looking at you, Robert Heinlein, and sometimes, much though I like him, John Varley). Socialists are better at describing what conditions might lead to a revolutionary crisis and a new world built on the ashes of the old. We have long arguments about it and whole schools of theory erected to it. And we love those debates. 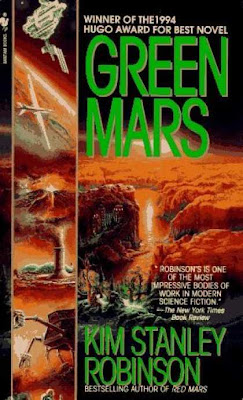 Well, so does Kim Stanley Robinson. Here is finally an author who not only imagines alternate futures (and an alternate past, too, see more below) but who also describes the How To Get There. Not only does he write the most realistic description of what a revolution might be like that I’ve ever read, but he even counterposes two trilogies – one could be stated as Revolution, and the other, Reform.

Kim Stanley Robinson is a self-described “green socialist” who admires Noam Chomsky. Thanks, Wikipedia. I would have guessed both of those things anyway, from his writing. There is a healthy tinge of the sort of affinity group anarchism of the late 1990s and early 2000s in his writing.

He is an extremely prolific author: three trilogies, several freestanding books, and many, many short stories. Most of his novels develop themes that resonate with socialists: what possible futures exist for our current environmentally precarious capitalist, crisis-ridden society? What, very concretely, can we as humans do, with science, technology, and political and social creativity to stop and reverse the destruction of earth’s ecosystem? What can we do to bring about egalitarian relations between humans? Robinson brings these questions alive.

The Mars Trilogy
In his most well-known work, the Mars Trilogy, published between 1992 and 1996, Robinson imagines an alternate future where the invention of medical longevity treatments allows characters to live through the colonization and contested terraforming of Mars. His initial scientist-settlers are a mixed crew of Russians and Americans – there is something about former Soviet citizens that has really spoken to socialist science fiction authors (cf. Ken MacLeod). They successfully land on Mars and establish a settlement, but then a debate emerges about whether to try and preserve Mars’ environment as it is, sans breathable air or free water, or whether to use science to dramatically change the planet – to “areoform” it, as a parallel to the notion of terraforming Earth.

There are two revolutions in the course of Red Mars, Green Mars, and Blue Mars, and both are described in minute detail. Unlike any revolutions I have ever seen elsewhere in fiction, these consist in large part of long, long, long meetings, and votes, and countermotions, and impassioned arguments.

There are some rifles, too, but really, the meetings have the most impact. They are very inclusive – instead of a vanguard model, they very clearly reflect the sort of spokescircle arrangement common in the anti-globalization movement and in parts of the 2003 antiwar movement. Very “Direct Action To Stop the Corporations and Areoformers.” 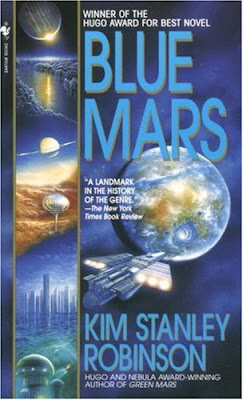 Robinson manages to make these very specifically rendered and nearly endless meetings fascinating, though possibly that has something to do with my red diaper childhood growing up in the movement. I’m pretty inured to long meetings. But they are fascinating, really. And realistic.

The Mars colonists do break their ties with the statified transnational corporations of earth, and they work out compromises among their differing viewpoints of what to do with Mars’ um, areology.

In Forty Signs of Rain, Fifty Degrees Below, and Sixty Days and Counting, Robinson takes on more directly the question of global warming and eco-catastrophe. The extremely detailed revolutionary planning sessions of his Mars trilogy are here replaced with extremely detailed descriptions of grant writing and grant granting, by the National Science Foundation. Again, this was pretty fascinating to me – in part because the ways and means that humans have already developed that COULD BE deployed to help arrest climate change are so convincing.

The science is at least hopeful, like that one single slide in Al Gore’s powerpoint presentation, er, I mean, movie, An Inconvenient Truth, which showed concrete solutions and how much restoration of the atmosphere would result from each.

But this trilogy presents Reform, rather than Revolution. The Masses in this book are popular scientists and the liberal policy wonks of Washington. The heroes are in one case, Buddhist monks from a microstate facing extinction due to rising ocean levels, or a Democratic presidential candidate who runs on a Fix the Earth platform. 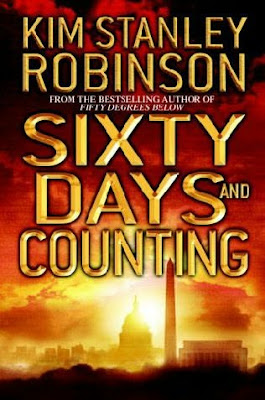 I had this fantasy when I was eight. Why couldn’t we groom and run a socialist revolutionary as a “Democrat” and then UNMASK him or her after the election?! My father took me seriously and explained that unless there had been a long period of radicalization and independent political victories alongside this submarine candidate, the electoral and Congressional system was designed to restrict such a victory of just the executive. Okay, he didn’t use that language, but I got the point.

The secondary plot, about an NSF scientist who falls for a black ops National Security Agency employee who is trying to combat her rogue Total Surveillance operative husband, is kind of ridiculous, and more limited in its social/gender creativity than Robinson’s Mars trilogy characters were, though to be fair, it’s not his main strength as a science fiction author. For that sort of thing, Marge Piercy is a much better option.

Nevertheless, it is well worth reading, for the science, and the potentials and limitations on electoral reform as a solution to anthropogenic climate change.

One more plug: normally, I am not keen on alternate histories, but Robinson’s The Years of Rice and Salt poses a fascinating question, whether you agree with his answers or not: what would world history have been like if the Bubonic Plague had killed 95 to 99% of Europe’s population instead of the 30% it actually did kill? No significant Christianity or European expansion. Imagine it, and then, seriously, go read the book. Robinson takes the same characters through ten historical generations by means of Buddhist reincarnation of a jati of related souls, whose different incarnations can be identified by their first initials, so you’ll learn a little comparative religion, too, something we socialists would do well not to ignore.