Not Under My Backyard 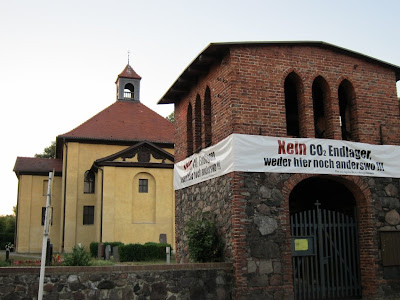 The next Chernobyl? A death blow to tourism? Poisoned drinking water? The residents of Beeskow, Germany worry that a planned CO2 storage facility under their town could end in disaster and are fighting the project. Europe, though, hopes the technology will drastically reduce emissions.

The signs are everywhere -- on church towers, on fences surrounding private homes and in storefronts. At first glance, the scenes evoke the large-scale protests against nuclear power that rattled Germany in the 1970s and 1980s. The resemblance is no accident. Residents in the quiet town of Beeskow in the eastern German state of Brandenburg are gearing up for a fight. They fear the pollutants that are about to be pumped beneath their homes could become the next Chernobyl.

"A field trial under our community is not acceptable," says Beeskow Mayor Frank Steffen.

The town's residents are upset about plans by a German division of Swedish energy giant Vattenfall to build a carbon dioxide (CO2) storage facility in a saline aquifer far beneath Beeskow's cobblestone roads. The site is one of a handful across Europe where companies and governments want to test a process known as carbon capture and storage (CCS), a technology that proponents say will massively reduce CO2 emissions from coal-fired power plants. Instead of belching the emissions into the sky, CCS technology would capture, liquefy and then pump the CO2 into underground storage sites.

CCS has been hailed by advocates as a way to greatly reduce the amount of CO2 emitted by pollution-heavy industry and help countries achieve their goals for limiting emissions of greenhouse gases in order to slow or stop global warming. The International Energy Agency (IEA) estimates that wide-spread adoption of CCS would be the cheapest way to cut emissions by half by 2050, arguing that the technology could contribute nearly 20 percent of those cuts. Critics, however, note that CCS technologies also require significant amounts of energy. The Intergovernmental Panel on Climate Change (IPCC) estimates that power plants would need between 11 percent and 40 percent more fuel once CCS technology is installed. 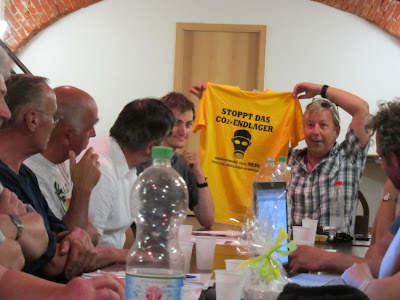 The most vehement critics of CCS, though, have proven to be those living near the planned facilities. "They are experimenting with humans," says local vacation home owner Mike Kess, the 38-year-old spokesman for a group of residents that formed to combat Vattenfall's plans. If CO2 leaks from the aquifer, they fear, it could contaminate drinking water -- or worse. Residents are also concerned the facility could negatively impact tourism in the economically volatile region. "Who wants to go on vacation in an area with this kind of stigma," asks Kress?

Chancellor Angela Merkel's cabinet is expected to approve legislation in September that would open the door to greater CCS research at different sites around the country. The bill is the implementation of a 2009 European Union directive establishing the legal framework for the "safe geological storage" of CO2 to contribute to the fight against climate chage.

Under the German bill, tests could be conducted in the country with a maximum total volume of 8 million tons per year, and mass quantities could only be stored after the technology's "harmlessness has been demonstrated." The government views CCS as a necessary step to secure the country's long-term energy supply. Under the bill, each German state would be given greater freedom to issue permits for research at potential CO2 storage sites -- in saline aquifiers like the one planned in Beeskow, or in empty oil and gas fields in other parts of the country. 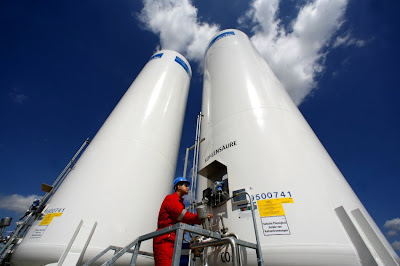 "There is no way we can turn off all the coal-fired plants from one day to the next," says Steven Bretz, a member of Merkel's Christian Democratic Union (CDU) in Brandenburg. His party is in the opposition in Brandenburg, the state that surrounds the German capital, but the CDU supports the government in its decision to allow the exploratory work in Beeskow and elsewhere.

Although CDU leaders in the area have promoted renewable energies, they also argue -- in contrast to the opposition Green Party -- that coal-fired plants must remain an essential part of the energy mix for the foreseeable future. And even if the number of coal plants doesn't increase dramatically in industrialized countries like Germany, reliance on coal for power is growing massively in emerging economies like China and India. "We have a moral obligation to participate in CO2-reduction on a global level," Bretz says. He feels the country has a duty to develop technologies for cleaner production of coal-based energy that can create a model for other countries and be exported.

In Beeskow, where permission to commence has already been granted by the state, locals are hoping that the national debate over CCS technology will give them the momentum they need to stop Vattenfall's plans. Local officials have filed a petition with the state government in the hope of having the permit revoked. Instead, they are proposing that the site be used for a project to explore geothermics, the generation of heat and energy using naturally occurring heat from far below the earth's surface.

'CCS Can Build a Bridge' 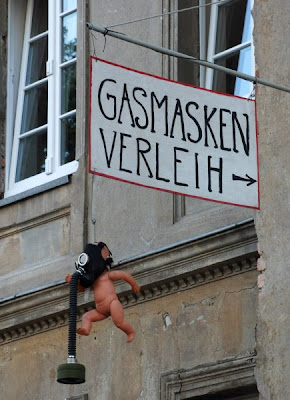 Officials at Vattenfall acknowledge the need for discussions. "We think this technology can build a bridge between coal and renewable energies to give the latter the time they need to grow in terms of reliability and efficiency," says Vattenfall spokeswoman Katharina Bloemer. At the moment, a number of CCS technologies are being tested in pilot projects in Germany, France, Norway, the Netherlands, Australia, Canada and the United States. In Europe, many of the pilot projects are being partly funded by the European Union, which has earmarked more than a billion euros for the test sites.

Researchers from the German Research Center for Geosciences (GFZ) in the town of Ketzin in northwestern Brandenburg, have so far reported success with a similar test facility operating there. They have already injected some 36,000 tons of CO2 at a depth of 650 meters (2,132 feet). Project coordinator Hilke Würdemann recently told SPIEGEL the results have been promising. "The conditions are as we expected."


'An Excuse to Keep Generating Power from Coal'

The site is equipped with monitoring devices that would shut down the system as soon as any leak is discovered. But even if CO2 were to creep into the drinking water despite all the safety precautions taken, scientists say it would merely carbonate the water, not unlike a soda.

CO2 , though, is heavier than air and could become dangerous if mass quantities were to collect at a single location, like in a valley. If CO2 reaches a concentration of 5 percent, it can cause headaches and dizziness. At 8 percent, it can cause respiratory failure. But researchers like GFZ's Michael Kühn argue that those risks are extremely limited. "If you hold your head under water long enough, you will also die," he says with a laugh.

When the federal government first proposed a law promoting research into carbon capture and storage, the scientists on the German Advisory Council on the Environment issued a statement regarding potential risks associated with CCS. The independent advisors to the government included the example of Lake Nyos in Cameroon. A volcanic eruption there caused carbon dioxide gas to escape from the lake, killing 1,700 people as far as 27 kilometers (about 17 miles) away. But S. Julio Freedmann, a scientist studying CCS at Lawrence Livermore National Laboratory, told the ClimateWire news service that the disaster at Nyos was directly related to the volcano.

"The experience with the storage of natural gas makes one optimistic," climate economist Ottmar Edenhofer of the Potsdam Institute for Climate Research told SPIEGEL in an interview last year. "It is very probable that the stored CO2 would remain in the ground for thousands of years. Any escaped gas would immediately mix with the air and become harmless." 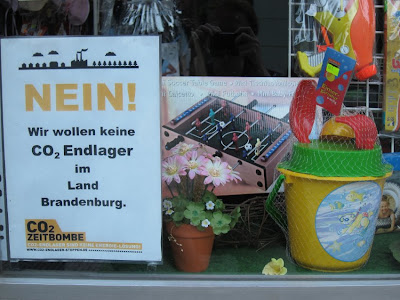 Despite the extremely remote chance of CCS creating toxic clouds, residents in towns like Beeskow, which has a population of around 8,000, are nevertheless concerned. As part of the federal government's legislation, compensation funds are foreseen for property owners living above the storage area -- a move that has raised the suspicions of locals. "If this technology is so safe, then why do we need to be compensated?" asks Udo Schulze, a member of a group in Beeskow protesting the plans. Schulze, who owns a local pub, meets every week with about 20 other opponents to organize their challenge against Vattenfall.

Others oppose CCS for philosophical reasons -- seeing it as the wasteful allocation of funds to an unsustainable fossil fuel technolgy. "In my view, CCS is fundamentally wrong," says Beeskow Mayor Steffen. "It was invented to keep the old-fashioned way of producing energy from coal alive."

And they argue the technology could prove to be a waste of time. "If we see in 15 years that the technology isn't working, then we will have lost those years," warns Anike Peters of Greenpeace Germany. "CCS leads to a dead end and just serves as an excuse to keep generating power from coal," she adds. Peters and others would like to see the money now being used to investigate ways to make coal cleaner in other ways -- to promote renewable energies, for example.

In Beeskow, opponents believe they have good chances of success for two reasons. In 2009, Kess was part of an effort to prevent Vattenfall from building a new soft coal power plant in Berlin. Under pressure from local residents, the company abandoned its plans. Now, he is determined to repeat this success in Beeskow.

Another historical example also gives them hope. The same year Kess fought Vattenfall in Berlin, German energy company RWE sought to open up a CCS facility in the northern state of Schleswig-Holstein -- but ultimately failed. Residents there refused to live on top of large deposits of carbon dioxide -- and their sentiment was backed by the state government, comprised of the CDU and the normally business friendly Free Democratic Party (FDP).

"The company didn't provide enough information about the risks and opportunities of CCS to residents and politicians," says Michael von Abercron, a state parliamentarian for the CDU in Schleswig-Holstein.

Now, Brandenburg residents are hoping that the government of Schleswig-Holstein will vote against the new law in the Bundesrat, Germany's upper legislative chamber. "(Schleswig-Holstein Governor) Carstenson has to say no," demands Peer Jürgens, a member of the Left Party who attended the Beeskow protest planning meeting.

"Right now, the law is just a draft and we can't say how we will vote," von Abercron, says. "Every state has to be able to decide on its own." In the past, however, Governor Carstensen has indicated he would oppose the legislation. His opposition helped derail a first attempt by Merkel to introduce CCS legislation in 2009 in her previous government.

"Some people want to make the second and third step before the first," says Thomas Domres of the Left Party in Brandenburg. "First we need to do more research, and then we can decide."

If all else fails in the city's opposition to the CCS project, Mayor Steffen is hoping that the steep price alone will ultimately scare utility companies away. He argues that the technology is "too difficult and expensive to implement." Existing power plants would have to be outfitted with an expensive capturing device, and studies suggest that commercial carbon-capture coal plants would spend €40 to €60 ($50 to $80) for every ton of CO2 they avoid emitting.

Europe has an emissions trading program that provides incentives to utility companies to adopt greener energies, but with certificates currently trading at around €14 ($18) per ton, it may be a long time before carbon capture and storage is attractive to companies on a broad scale.
Posted by Next Year Country