Left voters swing behind Greens, but what next? . 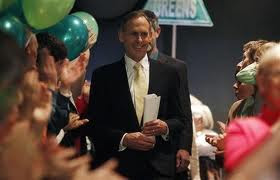 In an election where the major parties put forward nothing but right-wing policy, the Greens have seen a massive boost to their vote – a clear indication that significant numbers of people are looking for a left-wing alternative.

But the contradictions in how the party has positioned itself in the election campaign will prove problematic now they have the balance of power in the senate.

Voters have left the ALP in droves, delivering a swing of 3.6 per cent nationally to the Greens. At the time of writing, the Greens vote as a share of the total has increased to 11.4 per cent in the lower house and to 13 per cent in the upper house.
Read more here.
Posted by Next Year Country