The empirical evidence that humans are causing global warming

When presented with the overwhelming evidence that the planet is warming, many people react by asking "but how can we be sure that we’re causing the warming?" It turns out that the observed global warming has a distinct human fingerprint on it.

In climatology, as in any other science, establishing causation is more complicated than merely establishing an effect. However, there are a number of lines of evidence that have helped to convince climate scientists that the current global warming can be attributed to human greenhouse gas emissions (in particular CO2). Here are just some of them:

The first four pieces of evidence show that humans are raising CO2 levels:

1.Humans are currently emitting around 30 billion tonnes of CO2 into the atmosphere.
2.Oxygen levels are falling as if carbon is being burned to create carbon dioxide.
3.Fossil carbon is building up in the atmosphere. (We know this because the two types of carbon have different chemical properties.)
4.Corals show that fossil carbon has recently risen sharply.

Another two observations show that CO2 is trapping more heat:

1.Satellites measure less heat escaping to space at the precise wavelengths which CO2 absorbs.
2.Surface measurements find this heat is returning to Earth to warm the surface. 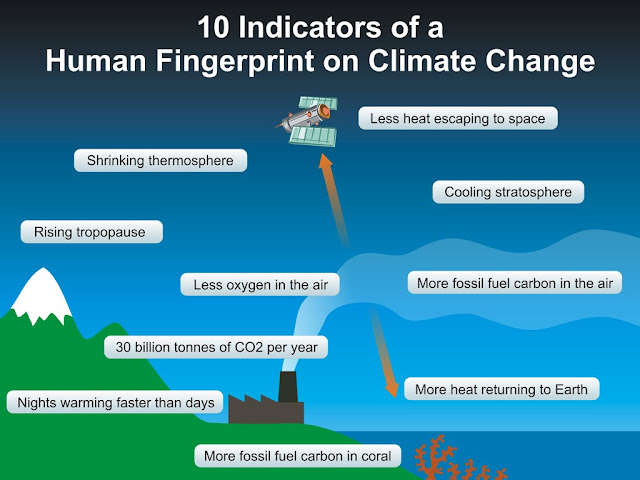 The last four indicators show that the observed pattern of warming is consistent with what is predicted to occur during greenhouse warming:

1.An increased greenhouse effect would make nights warm faster than days, and this is what has been observed.
2.If the warming is due to solar activity, then the upper atmosphere (the stratosphere) should warm along with the rest of the atmosphere. But if the warming is due to the greenhouse effect, the stratosphere should cool because of the heat being trapped in the lower atmosphere (the troposphere). Satellite measurements show that the stratosphere is cooling.
3.This combination of a warming troposphere and cooling stratosphere should cause the tropopause, which separates them, to rise. This has also been observed.
4.It was predicted that the ionosphere would shrink, and it is indeed shrinking.
(References for all of these findings can be found here.)

Often one hears claims that the attribution of climate change is based on modeling, and that nobody can really know its causes. But here we have a series of empirical observations, all of which point to the conclusion that humans are causing the planet to warm.


This post is the Basic version (written by James Wight) of the skeptic argument "It's not us". We're currently writing plain English versions of all the skeptic rebuttals. If you're interested in helping with this effort, please contact me.
Posted by Next Year Country