A Scientific Guide to the 'Skeptics Handbook' 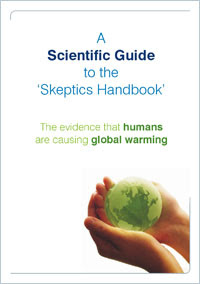 Not long ago, I read the Skeptics Handbook which displays some fundamental misunderstandings of how our climate works. I wondered whether a rebuttal of this document would be worthwhile but when I floated the idea to a few people, the general response was "been there, done that". It turns out there are a number of detailed rebuttals of the 'Skeptics Handbook'. Desmogblog wrote a 3 part series in 2008 (parts 1, 2 and 3). Climatechangebr.org has a useful set of short rebuttals with links to longer answers. Tim Lambert also examined some of the arguments. So the 'Skeptics Handbook' had been rebutted on multiple occasions.

Nevertheless, there was something else that needed to be said. The 'Skeptics Handbook' begins by asking "what evidence is there that more CO2 forces temperatures up further?" It then lays out 4 arguments: the greenhouse signature is missing, CO2 lags temperature, it's not warming and the CO2 effect is saturated. The great irony of the 'Skeptics Handbook' is when you examine these 4 arguments and the full body of empirical evidence that goes with them, what you actually find is the evidence that more CO2 forces temperatures up further. Here's a brief description of how the Scientific Guide examines 4 human fingerprints on climate change:

2.Satellites measure more heat being trapped by CO2. On top of this, ice cores find temperature affects the amount of CO2 in the air. So warming causes more CO2 and more CO2 causes warming. Put these two together and you get positive feedback.

3.The surface temperature record shows that the number of warm nights are increasing faster than warm days. This is another effect of greenhouse warming.

4.To find out whether the CO2 effect is saturated, we just have to look at direct measurements - satellites find CO2 is trapping more heat and surface measurements find more heat returning back to Earth.

All 4 arguments highlight 4 distinct human fingerprints on climate change. Once I'd compiled all the evidence into a single document, I sent it around to a handful of climate boffins to nitpick any inaccuracies in the text. Much thanks must go to the scientists who examined the Scientific Guide and helped clarify the text (they're all acknowledged in the inside cover). Much proofreading credit must also go to my wife Wendy who offered a crucial layman (laywoman?) perspective. Scientists tend to take technical language for granted and she was instrumental in boiling down much of the jargon into plain English. She also created the design which I think has a pretty awesome look.

You can download A Scientific Guide to the 'Skeptics Handbook' as an A5 PDF. The booklet is actually designed to be printed out on A4 then folded to A5. So if you want to print out the booklet, here's the A4 imposed version. I hope you all enjoy the Scientific Guide and feedback is welcome.
Posted by Next Year Country