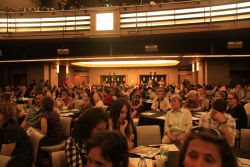 With one week to go until the the G20, an in-camera meeting between the worlds most powerful finance ministers and bankers behind a $5 million security fence, ordinary people from all over Canada and across the world are holding their own summit.

The People's Summit, an open membership summit set up as an alternative summit to the G8 and G20 meetings, aims to be a place where people "debate, discuss and learn about the issues that really matter to people the world over," according to the Summit's Program.
Read more here.
Posted by Next Year Country