Dutch voters went to the polls after government collapse over the continued deployment of troops in Afghanistan.
The Labour Party withdrew from Prime Minister Jan Peter Balkenende's Christian Democrat-led coalition in February because of disagreements on extending the deployment of the 1,950 Dutch troops deployed in Afghanistan, precipitating the need for a general election. Radio Netherlands describes the poll as a text-book election battle between left and right.

The Socialist Party, Green Left and the Labour Party, on the left of the political spectrum, wanted far fewer cuts in the next period of government than the parties on the right.

The result was a lurch to the right. Although the right only moved forwards by 3 representatives (now 83 out of 150 in total) this is made up from five parties and there was a shift inside the right vote away from the more moderate Christian democrats, with the most shocking gains being made by Geert Wilders 'Party for Freedom' who went from 9 to 24 seats in one fell swoop making them the third largest party.

This is extremely worrying as the Party for Freedom is unashamedly anti-Muslim and anti-immigration. the fact that the three explicitly Christian parties all lost seats to the other two parties of the right might indicate a more general growing secularism, opposing both Islam and other religions, but this should not obscure the fact that Wilders' party is a clearly racist organisation, however they like to dress up their proposals.

The Labour Party and Socialist Party between them lost thirteen seats (3 and 10 respectively), which mainly appear to have been lost to the liberal Democrats 66 (who went from 3 to 10 seats) and the Green Left (who went from 7 to 10 seats). 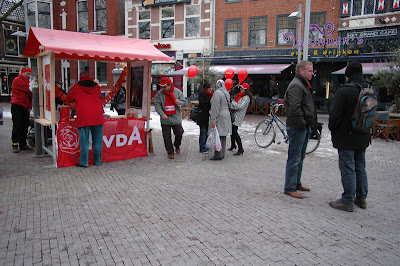 According to SP leader Emile Roemer is a good chance that the SP is necessary in forming a new cabinet.  "First is the word to the winners, the VVD and PVV.  But I think the formation of a right-wing coalition is very difficult ... The same applies to a coalition with Purple + VVD, PvdA, D66 and GroenLinks. '  If that fails a leftist coalition (PvdA, SP and Green Left) is in the picture with the CDA added.


The deployment of Dutch troops, who had been slated to return home in 2008, had been extended once. The Dutch parliament voted in Oct 2009 that the deployment must stop by Aug 2010.

"Party showed today the only party left a lot to me. It is clear that voters want a sustainable and social future. GroenLinks can and will the green and social heart of a progressive coalition."

There will probably be months of negotiations to produce a coalition government.
Posted by Next Year Country