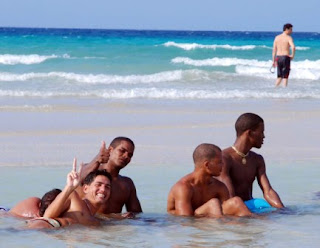 With the help of Venezuelan specialists Cuba is preparing to deal with the possible arrival of the BP oil spill to its pristine coasts, said General Ramon Espinosa, a deputy minister of the Revolutionary Armed Forces (FAR).

Espinosa spoke at a conference on disasters taking place in Havana. He said the island lacks experience on dealing with oil spill disasters and thus asked for experts from its chief ally.

Another top military official, Gen. Ramon Pardo, who heads the islands civil defense, said it would be a “serious misfortune” if the oil slick reaches Cuban coasts.

The tourism and fishing industries would be the most affected.

Pardo said the government has begun to prepare the population in the most vulnerable zones to confront such a possibility, reported IPS
Posted by Next Year Country