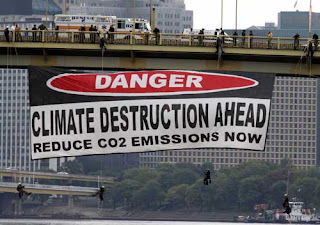 Canada has added climate change to the G8 agenda after coming under pressure from world leaders and environmentalists.
A spokesman for Prime Minister Stephen Harper confirms climate change will be on the table at both the G8 and G20 summits in Ontario later this month.

Leaders from the European Union, Mexico and the United Nations have been calling on Canada to put climate change on the to-do list when it hosts the summits.

Nobel Peace Prize laureates and environmentalists have also joined the chorus.
A coalition of environmental groups noted today that African leaders have been invited to the G8 as observers.

They said that not discussing the issue at the summit would have been a "slap in the face" to those leaders since their countries are suffering the most because of climate change.
Posted by Next Year Country