Lima, Peru -- Indigenous peoples in Peru are celebrating a victory today, as their leader Alberto Pizango has been released from detention. Pizango was arrested yesterday at the Lima airport, immediately upon his return after nearly a year of exile in Nicaragua, on the basis of charges widely regarded as politically motivated and unsubstantiated.

At a private hearing this morning, the Peruvian court granted Pizango’s request to reverse the capture order and to release him on his own recognizance pending trial. The judge placed a series of conditions on his release including that he is not allowed to leave the country and he must report to the court each week, among others. Read more here. 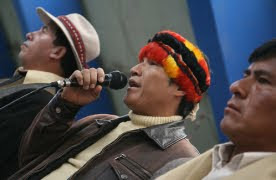 Albert Pizango, the leader of Aidesep, the indigenous network in the Peruvian Amazon, spent a year in exile after a government militia massacred local people protesting at Amazon destruction.
This week he returned to Peru after a year in Nicaragua and was arrested yesterday.

He is accused of formenting violence. When the violence occurred in Bagua, it involved the Peruvian authorities first shooting and killing over a hundred protesters. And Pizango was hundreds of miles away in Lima.

Aidesep have done a wonderful job preventing the Amazon from being taken by oil and gas companies. Because they protect the environment, they face imprisonment and death.

Please protest.....letter to Peruvian President Alan Garcia here. (the link is in spanish but you can write in English and use google translate if you need to!)

And please spread the word, if you care about your planet the most effective thing you can do is to support Aidesep.
Posted by Next Year Country