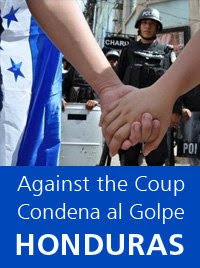 Tamar Sharabi had been working in Honduras on projects involving sustainability and water for several years when she was witness to the effects of the coup in Honduras at the end of June last year and turned to working on a media project.

As a media worker she was directly affected by the heavy repression and was witness to the numerous human rights violations of the coup regime. She has much to say about the particular effects of domination of Honduras a by a small elite on the situation of women, and how resistance to the coup and the coup regime has led to new levels of self empowerment.