The Enemy of Nature 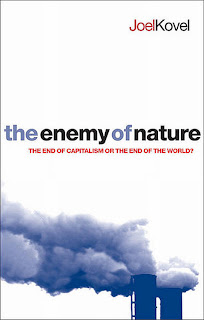 The obsession with growth and short-term profits combined with the complete corruption of the political system have finally rendered the environment defenseless against the worst excesses of the plundering corporate class. Meanwhile, the environmental movement —and the public at large—largely co-opted and in disarray, seem overwhelmed by the enormousness of the assault.

I BEGAN WRITING THIS NEW PREFACE IN NEW YORK CITY on January 6, 2007, a date which used to be considered the “dead of winter.” The thermometer registered 72°f, the streets were full of nervously smiling people, many in shorts, the ice-skating rink where I went for a midday break was a puddle, the Weather Channel was essentially giggling with the story. Wow!, opined the New York Times and helpfully pointed out that never before had the city gone so long without snow. But it never mentioned the words “global warming” or that this sort of thing may augur a day within the lifetimes of many now living when this great city, like all others on the coasts, will be substantially under water. Why spoil the fun?

I wrote The Enemy of Nature according to the principle that the truth – a sufficiently generous and expansive truth, it may be added – can make us free. If truth gives clarity and definition to our world, if it weans us from dependency on alienating forces that sap our will and delude our mind, and if it can bring us together with others in a common empowering project – a project that gives us hope that we can become the makers of our own history – why, then, then it makes us free even if what it reveals is terrible to behold. Better this than the unrevealed terror in the dark, unenvisioned, without opening to hope, better than what inertly weighs on us under the aegis of the capitalist order.

The Enemy of Nature was written in service of such an ideal. It tries to give expression to an emerging and still incomplete realization that our all-conquering capitalist system of production, the greatest and proudest of all the modalities of transforming nature which the human species has yet devised, the defining influence in modern culture and the organizer of the modern state, is at heart the enemy of nature and therefore humanity’s executioner as well.


If our institutions could grasp such an idea, then there would not have been an ecological crisis in the first place and this book would not have to be written. It follows that The Enemy of Nature was born in struggle and for struggle, and that it is for the long haul, as long as it takes. Thus, this second edition. The first, although ignored from above, has had a good, vigorous life from below, a kind of samizdat existence comprised of word-of-mouth networks, little pockets of the alienated and disaffected where the book has taken hold, circuits of distribution on the internet, study groups, a course here and there, a few foreign editions. A second edition is needed, however, to bring the argument up to date. The Enemy of Nature can never be a finished work; it must always be in a state of coming together, of becoming more integral – for a book, like all products of human labor, is also a kind of ecosystem. Each of the numberless presentations of this material I have made on five continents over the past five years has been a moment of re-vision, a reworking of this or that in light of changing contexts and the unending unfolding of the crisis. Each of these instances has been enriched by the voices of others; and so all these voices collectively enter into this second version. 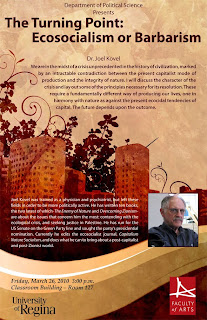 “Drill, Baby, Drill” is the criminally ignorant chant of Sarah Palin, the nation’s pre-eminent fascist pinup. The recent tragedy in the Gulf Coast is unlikely to move her to a more compassionate or enlightened position for we inhabit the age of near-total selfishness.
While I have no intention of rewriting the central ideas of a text which, in essence, appears more firmly grounded than ever, keeping faithful to the basic logic demands continual modification. This will be seen chiefly at the beginning and end, the former to bring the reader up to date as to the development of the crisis, and the latter to bear witness to the maturation of the notion of ecosocialism. In between, the critique of capital, the philosophy of nature, the rendering of Marxism in ecological form, the notion of the gendered bifurcation of nature, and those other features that comprise the work’s inner structure will remain largely as before, with a few improvements/updates added here and there. I intend to turn shortly to these themes in an extended study that has been germinating for some time.
Must-read for activists: Download the whole book free here.
Posted by Next Year Country