Climate change experts face a "McCarthy-like" persecution by politically-motivated opponents, some of the world's leading scientists have claimed. 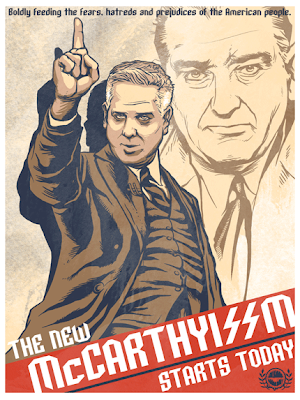 By Louise Gray
The Telegraph.co.uk
Phil Jones, the the academic at the centre of the climate change data row, said he has received death threats. In a letter published in the journal Science, more than 250 members of the US National Academy of Sciences, including 11 Nobel Prize laureates, condemned the increase in "political assaults" on scientists who argue greenhouse gas emissions are warming the planet.

The 'climategate' scandal and mistakes by the Intergovernmental Panel on Climate Change (IPCC) have led to a surge in attacks on climate scientists around the world.

In a strongly worded letter, the group of scientists likened the situation to the 'McCarthy era' in the US where anyone suspected of communist links was threatened with persecution. The period in the 1950s was named after the anti-communist pursuits of Senator Joseph McCarthy.

"We call for an end to McCarthy-like threats of criminal prosecution against our colleagues based on innuendo and guilt by association, the harassment of scientists by politicians seeking distractions to avoid taking action, and the outright lies being spread about them," the letter read.

The defence of climate science comes after a number of scandals cast doubt on the theory of man-made global warming. Emails stolen from the University of East Anglia (UEA) appeared to show scientists were willing to exaggerate temperature change in a scandal known as 'climategate', although two separate inquiries have found no evidence of misconduct.

Meanwhile the United Nations science body, the IPCC, that advises world governments about climate change was forced to retract a statement that claimed the Himalayan glaciers could melt by 2035.

The scientists fear the scandals have led to a witch hunt against those involved.

James Inhofe, a US senator and long-standing climate sceptic, has called for a criminal investigation of climate scientists. Professor Phil Jones, the head of the Climatic Research Unit at the UEA, said he considered suicide after receiving hate mail and death threats.

Worst of all, they fear politicians and interest groups in industry are using doubt over climate science to prevent the world from acting to reduce the threat of global warming.

"Society has two choices: we can ignore the science and hide our heads in the sand and hope we are lucky, or we can act in the public interest to reduce the threat of global climate change quickly and substantively. The good news is that smart and effective actions are possible. But delay must not be an option."

The letter points out that there is uncertainty attached to theory of evolution and the Big Bang. But like these theories, climate change has been "overwhelmingly" accepted by scientists.

"There is compelling, comprehensive and consistent objective evidence that humans are changing the climate in ways that threaten our societies and the ecosystems on which we depend," they said.

"Many recent assaults on climate science and, more disturbingly, on climate scientists by climate change deniers, are typically driven by special interests or dogma, not by an honest effort to provide an alternative theory that credibly satisfies the evidence."
Posted by Next Year Country