It ends in disaster.

I write this in a sand barrier motel in Grand Isle Louisiana, in a hot room overlooking an empty beach, and just a few of the six hundred-plus oil platforms in the Gulf of Mexico.

And it is hard not to ask: is BP another Captain Ahab?

Or, worse, is the United States?

Crude oil is not, of course, sperm whale oil, or "spermicetti". But they have had equally pervasive influences on their societies.

In Melville's 19th century, the oil was used to burn in lamps, make candles, soften leather and even, he writes, to anoint kings:

"Certainly it cannot be olive oil, nor macassar oil, nor castor oil, nor bear's oil, nor train oil, nor cod-liver oil. What then can it possibly be, but sperm oil in its unmanufactured, unpolluted state, the sweetest of all oils?"

A whole whale-hunting industry quickly grew on the Northeast Coast of the United States, especially in the town of New Bedford: the Houston of the whaling era.

What Melville's vast exploration of the culture of whaling does not recount, or foresee, is the hunting to near-extinction of those prize whales, and the untold damage to the environment caused by their merciless hunting.

Here in Louisiana, the potential damage is far more evident. 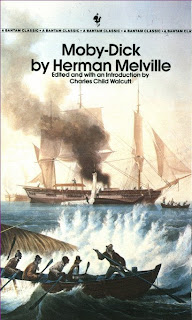 Science has progressed much since Melville's time: we have underwater robots filming the crude spewing into the sea; experts predicting, before it even happens, that giant plumes of oil one kilometre under the ocean will strangle all life forms requiring oxygen there, for a decade or more.

But what Melville did not need modern science, or undersea robots for, was plumbing human nature, and the damage unrelenting greed causes - not just to a man such as Captain Ahab, but to all his crew and to the whole society that supports their round-the-world quest for… oil.

This Al Jazeera crew has been chasing stories of environmental damage, tantalizingly dramatic in their details, but impossible to confirm.

A fish wholesaler who wanted to remain anonymous provides cell phone numbers of local fisheries men who, he says, have stories of "porpoises spewing orange foam out their blow holes", and sundry dead fish caught far out at sea, which, he reminds me, one does not especially want to handle or take aboard.

One call is not returned.

Another one gets such a curt and eager denial that I can't help but feel there's something to hide.

And as it turns out, many of the fishermen who can no longer fish, because BP has destroyed their fishing season, if not grounds, have now accepted temporary work for the oil giant in cleaning up its mess.

They have had to sign non-disclosure agreements which prevent the fishermen from saying anything which might hurt BP.

Melville's reading public surely would know the dictum "the truth shall set you free".

But not here. Not for this oil.

Tar balls washed ashore about 10km up the road from this motel.

Producer Tom Szypulski, cameraman Ryan Jackson and I quickly deployed, with visions of a dramatic news report in our heads. 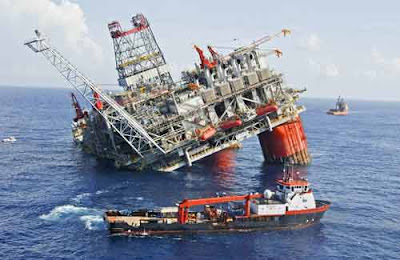 But access was limited to two half-hours each day; limited as well to a 20 metre-wide section of land ("don't go on the beach please") along a 16-km stretch of coastline hit by tar balls.
This TV crew pointed out to the kindly municipal PR man that this was not the stuff of which good television was made, and, frankly, that it looked like BP was covering something up.

"What would you do?"
Posted by Next Year Country