Bolivia: Between development and Mother Earth 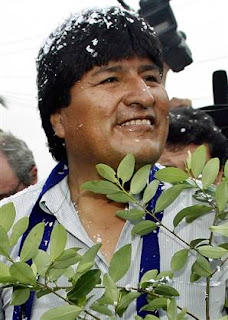 Bolivia’s silver mines in Potosi helped make Europe rich. The tremendous success of the April 19-22 World Peoples Summit on Climate Change and Mother Earth Rights held in Cochabamba, Bolivia, has confirmed the well-deserved role of its initiator — Bolivian President Evo Morales — as one of the world’s leading environmental advocates.
Since being elected the country’s first indigenous president in 2005, Morales has continuously denounced the threat posed by the climate crisis and environmental destruction.

Morales has pointed the figure at the real cause of the problem: the consumerist and profit-driven capitalist system.

Morales is leading a powerful indigenous movement pushing change in Bolivia and the region, which raises restoring harmony with nature as one of its key banners.

This revolutionary movement, with indigenous and peasant organisations in the forefront, has pushed the traditional Bolivian elite from power through a combination of electoral battles and mass insurrections.

It has begun the struggle to create a new “plurinational” Bolivia — based on inclusion and equality for Bolivia’s 36 indigenous nations.

There is an immense sense of indigenous pride and empowerment in Bolivia, a country whose original inhabitants were traditionally excluded.

This revitalised indigenous pride was a key feature of the Cochabamba conference, reflecting the important role of the region’s indigenous and peasant movements in environmental struggles.

The conference’s final declaration contained a strong emphasis on “the recovery and strengthening of the knowledge, wisdom, and ancestral practices of Indigenous Peoples” as an alternative to the destructive capitalist model.

Vivir Bien is an Aymara indigenous concept that means “living well and not at the cost of others”. 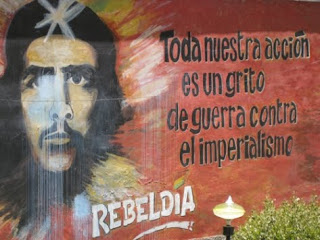 Together with these elements of indigenous “cosmovision”, the declaration included a strong anti-capitalist and anti-imperialist sentiment, again reflecting the mood of the summit.
It argued that, “for there to be balance with nature, there must first be equity among human beings”. It squarely denounced “developed countries, as the main cause of climate change”, calling on them to assume “their historical responsibility”.
Imperialist capitalism, benefiting First World multinational corporations, has not only intensified divisions between rich and poor within countries and environmental destruction. It has also entrenched divisions between developed and underdeveloped countries.
Having carved up the world among them, imperialist countries such as the United States and Australia have used their domination over Third World countries to keep them underdeveloped.

The economies of underdeveloped countries have been geared towards extracting raw materials for the benefit of the economies of the imperialist nations.

This gearing of Third World nations’ economies to providing cheap raw materials for export, at the mercy of market prices often manipulated by speculators, rather than seeking a rounded internal development, helps keep these countries in a state of permanent dependency and poverty.

Perhaps no country demonstrates this system better than Bolivia.

Four hundred years ago, the Bolivian mining town of Potosi was the third largest city in the world. Millions of tonnes of silver were extracted — helping finance a large part of Europe’s industrial development.

Today, thousands of cooperative miners work Potosi’s hollowed out silver mines in sub-human conditions to eke out a basic living. 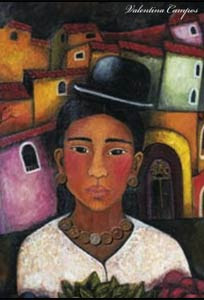 Breaking this dependency is a key challenge for the Bolivian government — and brings with it many difficulties.
In the 2005 election campaign, now-Bolivian Vice-President Alvaro Garcia Lineras summed up this dilemma when he said Bolivia’s choice was “industrialisation or death”.

The Morales government has reclaimed state control over gas and mineral reserves and nationalised 13 companies involved in gas, mining, telecommunications, railways and electricity.

This increased state intervention means the public sector has increased from 12% of gross domestic product in 2005 to 32% today.

With the 2006 nationalisation of gas reserves and signing of contracts with private companies in the sector more favorable to the state, the hydrocarbon sector alone has dramatically increased its contribution to the state budget from US$678 million in royalties in 2005 to $2 billion last year.

This extra revenue has allowed the government to increase social spending, particularly through new benefit payments to pensioners, families with children in school and pregnant women.

An estimated 2.8 million people out of Bolivia’s population of 9 million receive one of these new payments.

All of the macroeconomic indicators show important improvements in Bolivia’s economy. Last year, Bolivia had the highest rate of economic growth in the region.

Having maintained a budget surplus for the past five years, the government has ensured its international reserves have reached a record US$9 billion.

Despite this, the government has largely proven unable to make serious headway with its industrialisation program.

Several of its key mining projects face serious strife (see the article next page) and the country is yet to open a single gas processing plant.

A combination of troublesome relations with multinationals and a lack of technical cadre, among other factors, help explain why.

As a result, Bolivia’s economy — and therefore the social programs — is arguably more dependent on extraction-based activity than five years ago. 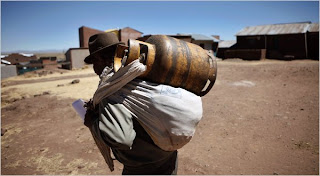 This problem gets to the heart of debates that arose at the climate conference over difficult questions. These include the involvement of progressive governments, such as in Bolivia, Venezuela and Ecuador, in oil mining in the Amazon, as well as the deepening of the extraction-based economic model in Latin America.

Alberto Acosta, the former president of Ecuador’s constituent assembly that produced the world’s first constitution that explicitly defends the rights of Mother Earth, said: “It is necessary to question the capitalist logic and construct a post-capitalist society.”

However, he added: “We have to clearly point out those that are responsible [for the climate crisis] and look at our responsibilities.

“While it is true that the rich are the principal culprits, our countries that are tied to the world economy with an extractivist logic guarantee that these processes of accumulation continue reproducing themselves.”

It would be suicidal to argue that Bolivia should simply shut down its gas and mining industry, with the deadly social impacts that would entail.

The dilemma, however, was summarised by former Bolivian hydrocarbon minister Andres Soliz Rada. He described the “trap” Morales finds himself in, between “his industrialist offers with which he achieved his re-election and the indigenist demands to comply with his proclaimed defence of the environment”.

Morales expressed this dilemma when he responded to environmentalist and indigenous groups who oppose oil exploration in the Amazon by saying: “What will Bolivia live off?”

Without oil revenue, there would be no money for government benefits payments, he added.

Morales’s comments might surprise some only familiar with his powerful denunciations of inaction on climate change on the international stage. But the reality is his government’s proposed industrialisation program and redistributive social spending is a big part of why it maintains high popular support.

This contradiction is enforced on Bolivia by the imperialist system. Overcoming it ultimately requires rich nations to pay their climate debt — and help provide the means for poor countries such as Bolivia to develop sustainably.

In the meantime, Third World governments that seek to break the deadly cycle of poverty and underdevelopment will face difficult choices.

In 2007, Garcia Linera explained: “The outlook according to which the indigenous world has its own cosmovision, radically opposed to that of the West, is typical of latecomer indigenists or those closely linked to certain NGOs ...

“Basically, everyone wants to be modern. The Felipe Quispe [indigenous] insurgents, in 2000, were demanding tractors and internet.”

One example of this was the recent tensions between indigenous peasants groups over changes to the government’s land reform law.

Indigenous organisations from the Amazonian region in the east strongly criticised former vice-minister of land, Victor Camacho, and the Unique Confederation of Rural Labourers of Bolivia (CSUTCB) peasant confederation, for trying to “peasantise” indigenous communities via changes that would prioritise individual, and not collective, land titles.

This apparent contradiction between an “Andean cosmovision” (a concept that seemingly leaves out the other 34 indigenous groups based in Bolivia’s non-Andean regions) and indigenous peasants demanding individual rather that collective land titles can be understood if we grasp the dynamic underlining the Morales government. 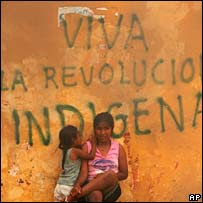 Rather than representing a desire to return to ancient indigenous times, this government is the product of a new anti-imperialism whose roots lie in previous nationalist movements.
It surpasses previous nationalist experiments because, for the first time, it is not military officers or the urban middle classes leading the project, but indigenous and peasant sectors.

Its solid core is represented not by indigenous organisations of indigenous peoples (who are also peasants) that have most questioned the apparent divorce between the governments Panchamama (“Mother Earth”) discourse and its action. It is represented by organisations of those peasants (who are also indigenous) that benefited from previous land reforms by nationalist governments — and today own individual plots.

This is not to deny the important role the specific organisational, economic and political models of the country’s indigenous people play in the process. This is what most clearly differentiates it from previous nationalist governments and is a crucial aspect of its revolutionary dynamic.

Nor can it be denied that the Bolivian government is the leading global advocate in defence of the environment and promoter of a global alliance to wage such a struggle, incorporating strong elements of indigenous cosmovision in its discourse.

However, there is the need for a serious debate in Bolivia, which appears to be beginning post-summit, over how to begin a transition from its extraction-based and dependent economy towards a post-capitalist, sustainable society.

This will require going beyond romantic declarations of the birth of a new “civilisatory and cultural perspective”, or a “world revolution of Vivir Bien”, and understanding the complex reality of Bolivian society and the difficult process of change underway.
Posted by Next Year Country