With Climate Chaos on the Horizon, the Environmental Movement Needs Traction
by Brian Tokar 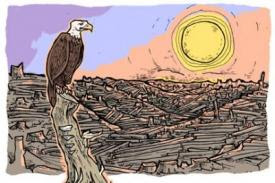 On the 40th anniversary of Earth Day April 22, many seasoned environmentalists are left wondering how, in recent decades, so little has actually been accomplished.
As we celebrate, or contemplate Earth Day, we should remember the 'central element of what has made environmentalism such a compelling counter-hegemonic worldview ever since the 1970s: The promise that reorienting societies toward a renewed harmony with nature can help spur a revolutionary transformation of our world.'(Image: Gino Barzizza)While environmental awareness has seeped into mainstream U.S. society since the 1970s — the era when 20 million people hit the streets on Earth Day to demand action — the structures of power remain largely the same.

The mass mobilizations around the original Earth Day helped spur then-President Richard Nixon to sign a series of ambitious environmental laws that helped to clean contaminated waterways, saved the bald eagle from the ravages of pesticides and began to clear the air, which in the early 1960s was so polluted that people were passing out in cities across the country. Most environmental victories since then have benefited from those changes in the law, but more fundamental changes seem as distant as ever.

Read the full article here.
Posted by Next Year Country