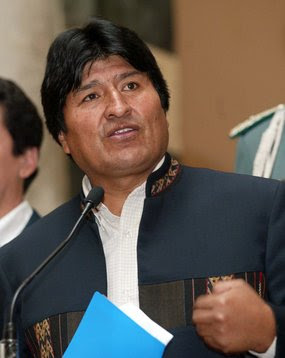 The Bolivian leader Evo Morales will chair the delegation of villages to deliver at the headquarters of the United Nations Organization (UN) in New York, the resolutions passed this week by the Conference I of Global Climate Change and the Rights of the Mother Earth (CMPCC) held in Cochabamba by over 40,000 delegates from indigenous nations and social movements have come from 147 countries on five continents, he confirmed during a speech on Friday.

The Head of State said he will meet with UN Secretary General Ban Ki-Mon, whose advisers have already expressed interest in knowing in detail the initiatives CMPCC, held in the Bolivian population of 20 to 22 April.

"Once the date is fixed for the meeting, I decided to accompany delegates from social movements and peoples of Africa, Europe, Oceania, America and Asia to raise awareness of the document adopted at Tiquipaya" he said.

At that meeting passed several resolutions in defense of Mother Earth and life in the beginning of a series of battles in the world to raise awareness of the need to intervene in the matter to preserve the life and nature.

In a rally held in Cotumayo, a town in the municipality of Tiquipaya, 412 km from La Paz, Morales said that among those resolutions is the creation of the International Court of Justice Climate which will function to prosecute and punish those nations, companies, and individuals and legal persons who commit crimes against nature.

"If the UN is not viable the creation of this tribunal, which is an order of the world's peoples, we present a case before the International Court of Justice in The Hague against those nations who refuse to defend nature and Mother Earth and even reluctant to sign agreements like the Kyoto Protocol, "he noted.

He said people now have the newly created Global People Movement for Mother Earth, which facilitates all actions to ensure that the world respects nature and the environment.

The President stressed that there have been two important steps to convene and bring together tens of thousands of people in Bolivia, representatives of governments, and international social organizations and others to discuss openly what humanity must do to avoid disaster and destruction the planet.

"What is now is not to keep the resolutions but to implement and push for governments to translate them into policies for the defense of Mother Earth," he said.

He added that, for example, Bolivia has submitted to the UN a draft resolution for water to be declared a universal right, so that everyone has access.

"Likewise we must encourage a global debate on the rights of Mother Earth because of it we depend for survival, why are more important the rights of nature that human rights themselves," he said.

He reported that the Bolivian government has decided to create a Ministry for the Rights of the Mother Earth.

The President said we need to develop new initiatives because the struggle between peoples must not be reduced to the Climate Change Summit to be held in Cancun, Mexico, in December.

"It must be a constant struggle to understand that the industrialized world must put aside their irrational industrialization programs that have put the world on the brink of disaster," he said.

The Bolivian president decided to preach the word and on Friday began a program of afforestation by planting 10,000 trees in the department of Cochabamba. Similar programs were initiated in the departments of Pando, La Paz and Oruro.

The program aims to plant 10 million trees over a period of one year until April 22, 2011, one for each inhabitant of Bolivia.

"We have a responsibility not only to save Bolivia, but the world because it is carrying out the task of defending the nature and the environment as a fundamental part in defense of life," he said.
Posted by Next Year Country