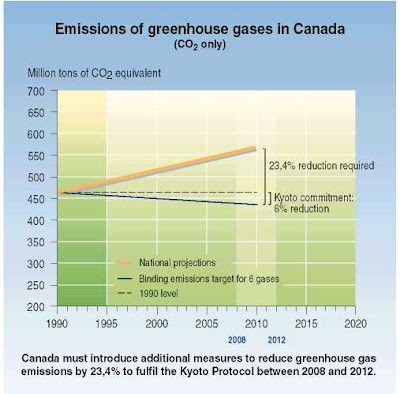 Well folks, the numbers are in and it's a blow out! In 2008, Canada's emissions dropped 2.1 per cent from their all-time high of 750 million tonnes the year before. Fantastic news! And, if you believe last week's press release from Environment Minister Jim Prentice, we have mostly the federal government's clever policies to thank.

The release attributes the decline in emissions to "Canada's efforts to use greater amounts of clean energy power generation, which is part of the Government's efforts to target greenhouse gas production."

Sounds great, but a few key details are missing from that picture. For instance, the increase in hydro use came primarily because of increased rainfall, not federal support for large-scale hydro. A decline in Ontario's coal use is also partly to thank, as a result of its nuclear plants being more reliable than in 2007, paired with its commitment to phase out coal-fired generation by 2014. And then (as the release does mention), there was the start of the recession, which led to an overall decline in energy use in Canada. It's also worth mentioning that the pervious year's high of 750 million tonnes resulted from a whopping 4.5 per cent jump in 2007.

Unfortunately, it's much harder to pinpoint any federal government-led efforts that may have contributed to the drop.

But who wants to let details get in the way of an opportunity to make the government look good? The release also states that, "The Government of Canada is a strong supporter of renewable energy technologies." This is the same government that failed to renew the funding in its last budget for the main federal program supporting renewable electricity — one reason why the U.S. federal government is set to outspend ours nearly 18:1 per capita on new renewable energy investments in 2010.

Still, government members have not been shy to take credit for the recent decline. Manitoba MP James Bezan, chair of the House of Commons Environment committee, announced last Wednesday:

"Just today we released a national inventory report for 2008 which shows that greenhouse gas emissions are down 2.1 per cent from 2007, or 16 megatonnes of CO2. That is an incredible achievement in just a few short years in government. Our government has acted on climate change and has got results."

If these results were policy-driven, then surely they would have been predicted by Environment Canada? Well, last spring, considering the impacts of all of its policies — including, charitably, the now-defunct Turning the Corner regulatory framework — the government anticipated that it would reduce emissions by one million tonnes in 2008. Instead, emissions actually fell by 16 million tonnes. So either this government's less-is-more approach is wildly more successful than even it anticipated, or there was some other cause for the bulk of the emissions drop.

Now, if we accept the former explanation, we shall also have to bow to the climate policy superheroes of the Bush Administration, who clearly out-policied us with a three per cent drop in emissions in 2008 (compared to our 2.1 per cent).

Or we just might have to give credit where credit is really due.

The summary of the new emissions inventory by Environment Canada staff finds that the decline in emissions can be attributed largely to factors we mention above. No mention, sadly, of any federal government policies.

It's worth noting that in the absence of major new government policies, the underlying trend in Canada's emissions (setting aside the occasional fluctuations caused by the economy or the weather) is one of continued, indefinite increases.

Expect the spin to follow similar trends.
Posted by Next Year Country