Before criticizing Iran's nuke program, Canada should look within
by Matthew Davidson
The Dominion - http://www.dominionpaper.ca/

"The best old school journalism understood that its purpose was to challenge power with unassailable facts; the best activist journalism knows that constructive resistance is fueled by media we can actually use. The Dominion represents the vital fusion of these two traditions: it deserves massive support." --Avi Lewis 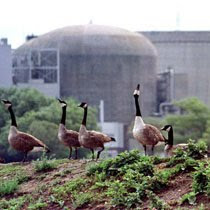 PETERBOROUGH—Eight of the world’s most powerful leaders meeting in Huntsville, Ontario, this June will discuss Iran’s nuclear power industry. Concerned over Tehran’s enrichment of uranium, Prime Minister Stephen Harper intends to use Canada’s leadership of the Group of Eight (G8) to push sanctions against the Middle Eastern country. Anti-nuclear activists, citing the prominence and recent growth of Canada's own nuclear industry, are pointing out contradictions in Harper's intentions at the G8.
Reacting to Tehran’s February 9 announcement that Iran had successfully enriched uranium at its Natanz nuclear facility south of Tehran, Harper announced his intentions to push the G8 to adopt harsher policies against Iran. “Canada will continue to work with our allies to find strong and viable solutions, including sanctions, to hold Iran to account,” he said in a February press release.

“The sting of a co-ordinated approach is always felt more strongly,” Harper said, adding that he aims to reach an agreement amongst the G8 countries prior to the G20 meetings taking place in the days following the Group of Eight's sit-down.
Read the rest of this article here.
Posted by Next Year Country