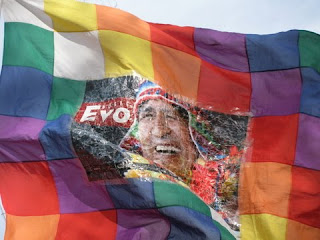 When Bolivia’s president, Evo Morales, was sworn in to a second term in January, he proclaimed Bolivia a plurinational state that would construct “communitarian socialism.” In an accompanying address, Vice President Álvaro Garcia Linare, envisioned a “socialist horizon” for Bolivia, characterized by “well-being, making the wealth communal, drawing on our heritage . . .” The process “will not be easy, it could take decades, even centuries, but it is clear that the social movements cannot achieve true power without implanting a socialist and communitarian horizon.”
During the past decade Latin America has become a scene of hope and expectations as its leaders and social movements have raised the banner of twenty-first century socialism in a world ravished by imperial adventures and economic disasters. Proponents of the new socialism assert that it will break with the state-centered socialism of the last century, and will be driven by grassroots social movements that construct an alternative order from the bottom up. There is also widespread concurrence that the process will take a unique path in each country, that there is no single model or grand strategy to pursue.

The new socialism has been characterized by a much slower and transitory process than the revolutionary socialism of the past century, which was based on the overthrow of the old regime, with a vanguard party seizing control of the state and moving quickly to transform the economy. A different scenario is occurring in Latin America where new governments take control politically, with the previous economic system largely intact. In Venezuela, Bolivia, and Ecuador, where the socialist discourse is the most advanced, constituent assemblies were convened to draft new constitutions that restructured the political system and established broad social rights. The process and pace of transforming their economies has become the task of the political and social forces acting through the new legislative assemblies and the “refounded states.”

In Bolivia, the struggle for a constitutional assembly and a new constitution was particularly strife-ridden as the oligarchy, centered in the resource-rich lowland area of the country, engaged in an outright rebellion with the tacital backing of the U.S. Embassy. Little was heard of socialism in this period, in spite of the name of Morales’s political party, Movement Towards Socialism (MAS). 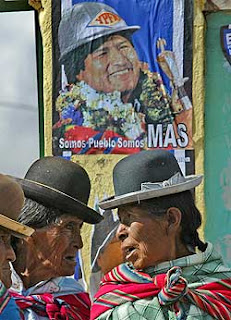 Now, with the consolidation of the new political system and the plurinational state, socialism has been placed on the agenda. In a number of public addresses and interviews, Vice President Garcia Linare and Foreign Minister David Choquehuanca have articulated what they envision as the Bolivian road to socialism.
Garcia Linare, a member of an armed guerilla movement in the early 1990s, who was captured and imprisoned for four years, now asserts that “in Bolivia we are working and betting on the democratic path to socialism. It is possible . . . because socialism is fundamentally a radical democracy.” He goes on to add: “The constitution provides the architecture for a state constructed by society and it defines a long path in which we participate in a process of constructing a new society, peacefully and democratically.”

Noting the uniqueness of the Bolivian process, the vice president states: “Bolivia is inserted in planetary capitalism, but it is different from other societies . . . community structures have survived in the countryside, in the high lands, the low lands, and in some parts of the cities and the barrios that have resisted capitalist subjugation.” He adds, “This is different from American and European capitalism, and it gives us an advantage.”

David Choquehuanca, in an interview, elaborated on the communal roots that facilitate the construction of socialism: “We have always governed ourselves in our communities. This is why we maintain our customs, perform our own music, speak our own Aymaran language, in spite of a 500-year effort to erase these things – our music, our language, and our culture. In a state of clandestinity, we have upheld our values, economic forms, our own types of communitarian organization, which are all being reappraised now. This is why we are incorporating into socialism something that has survived for 500 years — the communitarian element. We want to build our own socialism.”

He added: “In the communities, we always had our ulacas (assemblies), where debates took place. Those political spaces are being recovered. I don’t know if this can be called the seeds of a people’s government. What existed, what exists, is being reappraised, is beginning to be valued and developed. These are the times we’re in.” 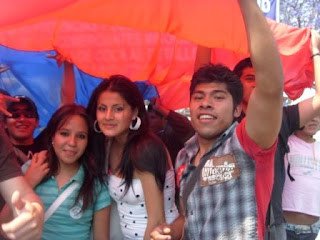 Choquehuanca also described the contemporary communities, and the unions that exist both within them and outside of them: “We organize ourselves in the communities. In Bolivia there must be around ten thousand communities, and in each community there is a union of campesino workers. Each union has a base that is associated first on a provincial level, and then on a departmental and national level. The national level is the Sole Union Confederation of Campesino Workers of Bolivia (CSUTCB). They are not naturally existing organizations, but organizations that helped allow us to assert our demands and participate in elections. There are several organized sectors with similar structures, such as the teachers, the miners, the indigenous groups, women, factory workers. And we have a mother organization, which is the Bolivian Workers Central (COB). These are the people’s organizations. President Evo Morales has called for strengthening them, since they are the agents driving this process of change.”

Some are skeptical of Morales’ commitment to socialism. Jim Petras, a Marxist scholar who has written on Latin American politics for half a century, asserts that Morales gives a “high priority…to orthodox capitalist growth over and above any concern with developing an alternative development pole built around peasants and landless rural workers.” This, he says, has led to “the increased size and scope of foreign owned multinational corporate extractive capital investments.”

From an ecological perspective, others like Marco Ribera Arismendi proclaim: "We have changed the discourse, but not the model.” A member of the Environment Defense League, one of Bolivia´s largest environment organizations, Ribera adds, "We had great hopes in this government to solve or make a change on these issues," but it has instead followed an extractive industry model that is driven by transnational capital. 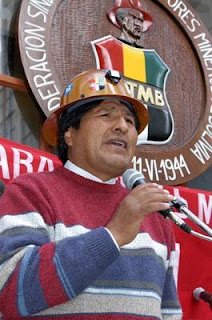 While it is true that Morales has not launched a full assault on capital, his government, along with the other new left governments in Latin America, have ended the neoliberal era in which the International Monetary Fund and the World Bank imposed free market policies, severely curtailing social spending, and enabling transnational corporations to gain unprecedented control of the region’s nonrenewable resources. Now, many of these governments are using the state to exert greater control of the economy, and are renegotiating the terms of investment in order to capture a greater portion of the revenue for social programs and to facilitate internal development and industrialization.
Morales, soon after taking office in 2006, moved against the foreign-owned natural gas and petroleum companies to take 50% of the revenues, and to make the state-owned petroleum company the administrator and, in some cases, a co-investor. Similar deals have been made with transnational capital in the iron-mining sector, and the government is in the process of negotiating state-dominated agreements for the exploitation of Bolivia’s huge lithium deposits.
Pablo Solón, Bolivia’s ambassador to the United Nations, who previously served as the representative on trade and economic integration issues, summed up the government’s policy: “We need foreign investment. The issue is the rules under which we are going to allow this foreign investment—how much they are going to leave for the country, how much they are going to have as profit, who is going to own it, the transfer of technology, the transformation of raw materials inside the country. Those are the key issues that Bolivia has synthesized into the words ‘When it comes to foreign investment, we don’t want bosses; we want partners.’ If they can accept that rule, they are welcome. We will no longer accept the relations that we had before.”
The process of transforming Bolivia’s social and economic institutions will be the task of the legislative branch, which will be drafting more than100 bills to implement the provisions of the country’s new plurinational constitution. Of central importance is the empowerment of the indigenous communities, and granting them the economic resources to construct communitarian socialism. The existing agrarian reform law will be revisited. According to Victor Camacho, the Vice-Minister of Land Issues, “we are going to re-territorialize the indigenous communities,” recognizing that the ancestral communal lands have been seized from the indigenous peoples since the conquest. 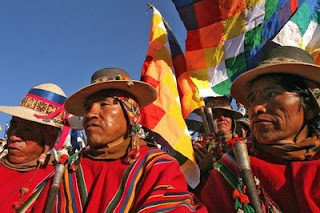 While advancing at a rhythm that reflects the country’s particular correlation of social and political forces, the Bolivian experiment is contributing to the resurgence of socialism on a global level. As Vice President Garcia Linares declares: “The society we have today in the world is a society with too many injustices, too much inequality . . . We have the seeds of communitarian socialism, badly treated, partially dried up, but if we nourish this seed in Bolivia a powerful trunk will grow with fruit for our country and the world.”

For Evo Morales, the necessity for socialism is global and urgent, given the state of the planet. “If capitalism produces crises in the financial system, in energy, in food, in the environment, in climatic change, then what good is this capitalism that brings us so many crises? . . What is the solution? I am convinced that it is socialism, for some socialism of the twenty-first century, for others communitarian socialism.”
Roger Burbach is director of the Center for the Study of the Americas (CENSA) and a frequent contributor to NACLA.
Posted by Next Year Country