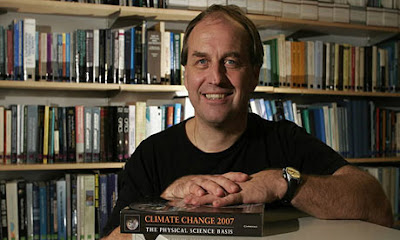 Andrew Weaver with the IPCC's 2007 report on which he was a lead author. Photograph: Ray Smith

One of the world's leading climate scientists has launched a libel lawsuit against a Canadian newspaper for publishing articles that he says "poison" the debate on global warming.

In a case with potentially huge consequences for online publishers, lawyers acting for Andrew Weaver, a climate modeller at the University of Victoria, Canada, have demanded the National Post removes the articles not only from its own websites, but also from the numerous blogs and sites where they were reposted.

Weaver says the articles, published at the height of several recent controversies over the reliability of climate science in recent months, contain "grossly irresponsible falsehoods". He said he filed the suit after the newspaper refused to retract the articles.

Weaver said: "If I sit back and do nothing to clear my name, these libels will stay on the internet forever. They'll poison the factual record, misleading people who are looking for reliable scientific information about global warming."

The four articles, published from December to February, claimed that Weaver cherrypicked data to support his climate research, and that he tried to blame the "evil fossil fuel" industry for break-ins at his office in 2008 to divert attention from reported mistakes in the 2007 report of the Intergovernmental Panel on Climate Change, on which he was lead author.

The lawsuit also highlights several claims in the articles that attempt to question or undermine the scientific consensus on climate change, including that annual global mean temperatures have stopped increasing in the last decade and that climate models are "falling apart".

Such statements, the lawsuit says, would lead readers to conclude that Weaver "is so strongly motivated by a corrupt interest in receiving government funding that he willfully conceals scientific climate data which refutes global warming in order to keep alarming the public so that it welcomes... funding for climate scientists such as himself."

Weaver said: "I asked the National Post to do the right thing, to retract a number of recent articles that attributed to me statements I never made, accused me of things I never did, and attacked me for views I never held. To my absolute astonishment, the newspaper refused."

A spokesman for the National Post said: "Beyond saying that we intend to defend the article, we do not comment on such suits."

Weaver is suing for libel three writers at the newspaper, as well as the newspaper as a whole and several, as-yet unknown, posters on the paper's online comment section. Such comments, typical on articles about global warming, included claims that Weaver was "as big a hypocrite as he is a fraudster" and a rat leaving a sinking "ship of lies, red-herrings and hysteria". One poster suggested he should be thrown under a bus.

McConchie Law Corporation, acting for Weaver, said that the National Post articles had "gone viral on the internet" and were reproduced on dozens of other websites, including prominent climate-sceptic sites Climate Audit and Watts Up With That.

The lawsuit says the newspaper "expressly authorised republication" of the articles by including online links that invited readers to email the story to others, and share it through tools such as Facebook.

McConchie Law said it was seeking an "unprecedented" court order that would require the newspaper to help Weaver remove the articles from across the internet. Media law experts said that such demands were becoming increasingly common in complaints to publishers, but this could be the first time they were tested in court.

Weaver's libel action follows an official complaint made last month by a leading UK scientist to the Press Complaints Commission over a story published in the Sunday Times. Simon Lewis, an expert on tropical forests at the University of Leeds, claimed the story published in January was misleading because it gave the impression that the IPCC made a false claim in its 2007 report that reduced rainfall could wipe out up to 40% of the Amazon rainforest. He said he told the newspaper that the IPCC's statement was "poorly written and bizarrely referenced, but basically correct".
Posted by Next Year Country