Climate Justice and its Anti-Capitalist consequences 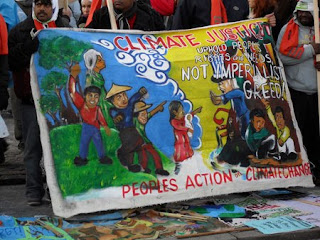 The whole political landscape of the climate 'debate' has changed immensely in the past year particularly in the wake of the UN climate negotiations in Copenhagen. This article attempts to stake out some of the new terrain and present some of the ideas that are now appearing at the level of grassroots social movements for climate justice.
Capitalism is crisis
The governments of the world have been unable to act to avert climate disaster; this failure reveals the contradictions inherent in a system which is responsible for causing this crisis. Many people are now seeing the climate crisis as one of the symptoms of the general catastrophe we call capitalism. Climate change stands alongside the current political-economic crisis and the impending energy, food and water crises as problems caused and exacerbated by the capitalist system of social relations. Ruling elites are consequently seeking to legitimise a system which is the root cause of these socio-ecological crises; using “crisis management” as an opportunity for capitalism to re-assert itself, creating a new round of accumulation and enhanced social control.

The green capitalist project of 'ecological modernisation', through false solutions such as; carbon trading, agro-fuels, nuclear power and carbon capture and storage, will continue to concentrate political and economic power to the hands of the ruling class. These elites have a vested interest in maintaining economic growth and business as usual, despite ever increasing destruction of our planets ecosystems and widening inequality between rich and poor. Climate change is evidence of the limits faced by a system of infinite growth on a finite planet. However our political systems are institutionally unable to respond to the scale of this challenge due to their commitment to serving the neoliberal agenda. Solutions must come from people themselves through an emancipatory transformation of social relations, in order not just to save the world, but to create a better one.

Read the full article here.
Posted by Next Year Country