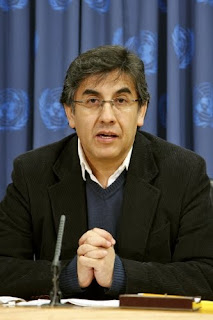 Pablo Solon, Bolivia’s ambassador to the UN, at a press conference during UNFCCC negotiations in Bonn on 10 April condemned continued attempts by some developed countries to impose a deeply flawed Copenhagen Accord as the basis for future negotiations: “The only way to get negotiations back on track not just for Bolivia or other countries, but for all of life, biodiversity, our Mother Earth is to put civil society back into the process.”

Solon explained it was this belief that motivated Bolivia to host an historic World Peoples’ Summit on Climate Change and Rights of Mother Earth on 19-22 April 2010 to which more than 15,000 people and up to 70 governments are expected to attend.

“The central aim of any climate summit is not to save itself and accept any outcome, but to come to an agreement that will save humanity.” Solon said that the Copenhagen Accord sadly marked a “backwards step” so could never be acceptable as a basis for further negotiations. Solon pointed out that the European Union’s own analysis of the Copenhagen Accord admitted that it would lead to an increase of temperatures of up to four or five degrees.

“This is no kind of solution. Yet at these talks [in Bonn] we never hear developed nations admitting concern over this. Instead the US claims this is the best agreement we have had. Are we really willing to say that allowing temperatures to rise to four or five degrees is a good goal?”

Solon reiterated the demands of many developing nations by calling on industrialized nations to rebuild trust. “You cannot rebuild trust by legalizing the same methods that led to the failure in Copenhagen.” Solon called for talks to be returned to the full UNFCCC process, and to develop on what had been agreed in COP15.

Solon commenting on news that the US and Denmark were withdrawing aid from countries like Bolivia for their opposition to the Copenhagen Accord said, “This in their rights, but unfair and clearly an attempt to punish Bolivia. What kind of negotiation is it where you lose money if you disagree?” Solon said that Bolivia would not back down due to such threats. “We are a country with dignity and sovereignty and will maintain our position.”

Webcast of press conference can be seen at http://unfccc2.meta-fusion.com/kongresse/100409_AWG/templ/play.php?id_kongresssession=2608&theme=unfccc
Republished from PWCCC website.
Posted by Next Year Country