The SPP, Deep Integration and Corporate Control - The Agenda Continues 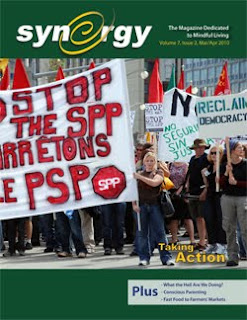 The Security and Prosperity Partnership (SPP) between Canada, the United States and Mexico is officially dead but the project of deep integration between the three countries continues, as does the overarching worldwide neoliberal agenda of privatization, harmonization, free trade and corporate control. In August of 2009, the www.spp.gov website announced that the SPP was no longer an active initiative of the US government and that this website was now an archive for the SPP. Since that announcement, there have been a number of indicators that what hasn’t already been implemented in the SPP process continues forward as separate initiatives.

Ship-Rider, a pilot project that became permanent in May 2009 allows the RCMP to ride on US Coast Guard vessels and US Coast Guard officials to ride on RCMP vessels so they can cross back and forth across the border without jurisdictional restraints. This is an example of a multitude of incremental changes, sold as crime fighting or security measures but which add to a continual erosion of Canadian sovereignty through the integration of police, military and security organizations between the three countries. In Mexico, the Merida initiative has included the involvement of the American military and the RCMP in the drug war inside Mexico. Will this mean we will see a boom in drug production in Mexico as we have seen in Afghanistan since the NATO led invasion in 2001?

The Harper government couldn’t determine it’s own position on climate change at the Copenhagen talks without knowing what the American position was because as the government stated ‘the Canadian position on climate change needed to harmonize with the American position’. Are our economies already too deeply integrated for Canada to be able to make important decisions all by itself? Canadian foreign policy also continues in lock step with the USA and in some cases takes an even more neo-liberal and militaristic stance.

It’s not just a problem of harmonization with the United States, the integration program is much larger than that. The Canada, European Union Trade Agreement (CETA) now under negotiation is also part of a harmonization and privatization agenda. According to the Council of Canadians, one of the key demands of the Europeans negotiators is that publically funded projects, and service contracts procured by any level of government, be opened up for bids by European corporations. “This would result in transferring the $22-billion our local governments spend annually on public priorities into corporate profits. An agreement with Europe would put pressure on provincial governments to increase privatization, including in areas such as water, transportation, child care and public health care.”

The new trade deal touted by the Harper government to allow Canadian companies to circumvent the Buy American provisions of the US stimulus package hands the European negotiators almost exactly what they want. Under this new deal, all the provincial governments will sign onto the WTO Agreement on Government Procurement (the GPA), something that had been actively resisted for years.

In an open letter to provincial premiers, Maude Barlow the chair of the Council of Canadians wrote, “Trade is undoubtedly important to the Canadian economy. But signing the provinces on to the WTO procurement agreement is not about trade – it is about reducing the role of democratic governance in economic matters. It is the economic equivalent of a 2,500-mile-diet at a time when governments around the world are seeing the benefits of going local.

“Buy Local policies are not protectionist,” adds Barlow. “They are smart economic policy. And signing the provinces into the WTO will exclude it as an option for Canadians.”

The Harper government ran on a promise of accountability, transparency and a commitment to bring all significant international trade agreements to Parliament for a debate and vote. This Buy American, WTO GPA trade agreement is being rammed through without any parliamentary approval process because parliament is prorogued. How very convenient.

Harmonization in and of itself is not necessarily a bad thing. We need international agreements and standards to protect human rights, prosecute war criminals, protect the environment and to curtail those individuals and corporations that would behave in a sociopathic manner in order to maximize their wealth and power. The problem with the current models of harmonization and globalization are that they are driven by the corporate sector and designed to maximize corporate control and profit at the expense of working class people and the environment. The SPP model of harmonization subverts the democratic process by giving regulatory and decision making power to the largest corporations without consulting any other stakeholders.

The recent US Supreme Court decision to overturn the McCain-Feingold campaign finance reform law, which limited the amount corporations can spend on political advertising is an assault on the US democratic system. The decision was based on the free speech rights of corporations, which are legally considered persons. This is extremely dangerous given that the annual profits of just one company like Exxon are ten times the amount spent in the last US presidential election, which was already an obscene amount of money.

The noose around the democratic system is tightening as we move increasingly towards a world ruled by corporations. If we are going to protect our environment and workers rights, strengthen our democracy and create a more egalitarian society we have our work cut out for us. It won’t be easy and is not as simple as writing letters or waving placards. We need to change the way we live and the way our society operates.

Paul Manly is a Nanaimo based filmmaker. His most recent film is ‘You, Me and the SPP: Trading Democracy for Corporate Rule.’ He is currently working on a follow up film tentatively entitled “So, what are you gonna do about it? - Practical steps to combat corporate globalization.” He can be reached through his websites at http://www.manlymedia.com/ or http://www.youmespp.com/