The Federal Conservative government's March budget  has a major section on “Green Jobs and Growth” but once again there is virtually nothing here that is positive or of any substance. 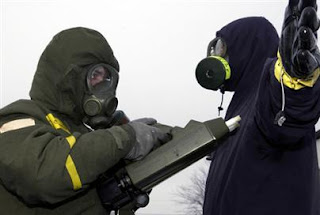 Over 70% of the new money in this area is simply another $250 million plus to Atomic Energy of Canada Ltd, which the government is planning to sell off, possibly to foreign interests. There are very small amounts for a great lakes action plan, more funding for tax depreciation for waste energy investments and some other announcements of ongoing programs.

The government’s emphasis continues to be funding for nuclear energy, carbon capture, ethanol and facilitating faster exploitation of oil and gas. The budget announces various funding programs to streamline regulation review and environmental assessments for resource projects in the north, which presumably involve a pipeline. And, unfortunately, the budget includes ultimately nothing to deal with the major environmental crisis of our time: climate change. (CUPE)

The Pembina Institute released a study a few years ago on the risks of nuclear energy. Here is what it concluded:

"This study has sought to portray, in as complete a manner as possible based on publicly available and accessible information sources, a picture of the environmental impacts resulting from the use of nuclear energy for electricity generation in Canada. It is intended to inform comparisons with other energy sources. 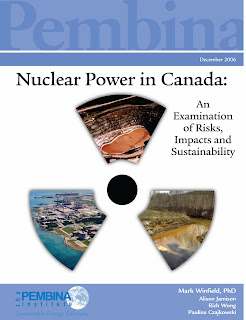 The study finds that nuclear power, like other non-renewable energy sources, is associated with severe environmental impacts. In short, the use of nuclear power for electricity generation cannot be considered “clean.” Each stage of the nuclear energy production process generates large amounts of uniquely difficult-to-manage wastes that will require perpetual care, and that effectively push costs and risks arising from current energy consumption onto future generations. The process also has severe impacts on surface water and groundwater water quality via a range of radioactive and hazardous pollutants, and results in releases to the atmosphere of a wide range of criteria, radioactive and hazardous pollutants as well as GHGs.

In addition, the technology poses unique occupational and community health risks, along with security, accident and weapons proliferation risks not shared by any other energy source.

Nuclear generating facilities suffer from high capital costs and long-construction times, with significant risks of cost overruns and delays. These are major barriers to private investment in the sector, particularly in combination with a history of poor facility performance in Ontario and emerging challenges regarding uranium costs and supply.

In the context of these impacts and risks, nuclear energy cannot be seen as a viable response to GHG emission problems associated with reliance on fossil fuels (e.g., coal) for electricity generation. In addition to the consideration that nuclear power is not itself a GHG emission-free energy source, a future path based on nuclear energy would simply replace one problem (GHG emissions) with a series of different, but equally unacceptable impacts and risks. These impacts and risks encompass everything from facility reliability and waste management to the potential for catastrophic accidents and nuclear weapons proliferation. 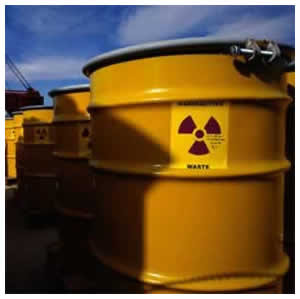 As a result, proposals for the retention and expansion of the role of nuclear power must be approached with the greatest of caution. Such proposals must be examined in the full light of their environmental, economic and security implications, not only for Canada, but the rest of the world as well. They must also be examined in the context of the full range of available alternatives. Such an examination is likely to conclude that better options are readily available. These options range from making the most efficient use possible of existing energy resources to expanding the role of low-impact renewable energy sources that offer far safer, cheaper, more reliable and more sustainable options for meeting society’s energy needs."

Read the full report here.
Posted by Next Year Country