Why have big environmental groups sold out the environment? Follow the money! (as usual) 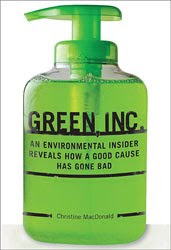 The highly paid leaders of big environmental organizations are compromising themselves and the planet by cutting deals—as well as wining, dining, and scuba diving—with corporate executives whose firms pollute and plunder resources. That’s the rather damning case laid out in Green, Inc. by environmental journalist Christine MacDonald, who challenges green groups to wean themselves from these tainted corporate donations and relationships, which range from apparent conflicts of interest to out-and-out scandal.

As an environmentalist, MacDonald is acutely aware of the interconnectedness of all things, and she touches on a constellation of related issues: greenwashing, green certification, dicey political alliances, indigenous rights, out-of-control logging and mining, even human rights and slavery. Green, Inc. doesn’t contain enough fresh enterprise reporting to be deemed a full-blown exposé, but the book ties together enough data, anecdotes, and previously reported material to be taken seriously as a critique of the business of environmentalism.

MacDonald singles out three organizations for her harshest criticism: the Nature Conservancy, the World Wildlife Fund, and Conservation International, where she briefly worked and thus attained “insider” status. She also notes improprieties and ethical lapses at other groups, and to be fair widens the circle of accountability to include all consumers: “Demanding to know where the products we purchase came from and how they were made is maybe the most important thing we can do to press corporations to clean up their operations and supply chains.”

This review was originally published in the January-February 2009 issue of Utne.
Posted by Next Year Country