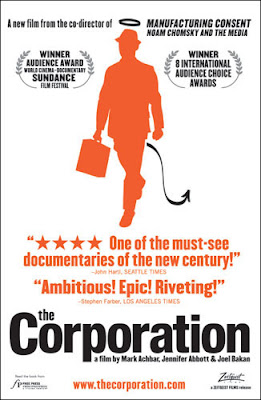 Joel Bakan is a Canadian lawyer and writer. The author of several books he is also one of the makers of the award winning documentary The Corporation. He spoke to NLP on the role of corporations in modern society.

How did the corporate form arise?

Various forms of the corporate form have been around for quite a while. Even Roman law had concepts of corporate identity that resemble modern corporate personhood. But the corporation as we know it today is really a product of the 19th century. Industrialization, and particularly the invention of the steam engine, made large-scale enterprise possible for the first time. The prevailing business form, the partnership, could not raise the kind of capital required by these enterprises because the number of investors was limited to the number of people who could practicably work together to run the enterprise.

The genius of the modern corporate form is that it separated ownership from management and thus made it possible for thousands, even millions, of individuals to be owners – to invest in various-sized chunks (shares) of the enterprise, and thus finance it. The task of running things would then be delegated by the shareholders to directors and professional managers. The corporate form could thus pool investment capital money from large numbers of investor/owners and finance large enterprises, such as railroads, steamship lines, and industrial works.

But this new class of anonymous and distant owners, having no real say or role in the conduct of a company’s day-to-day operation, demanded legal protection, whether to ensure their invested capital was used in ways that would benefit them, or to ensure they were not liable for debts and wrongs committed by companies they had no effective control over. Corporate law was reformulated, beginning in the mid-19th century, to provide those protections. The “best interests of the corporation” principle was added, requiring that all decisions made by managers and directors had to be geared to serving the best interests of the corporation and its shareholders; and so too was limited liability, which ensured shareholders would not be liable for company wrongs and debts.

A third principle, corporate personhood, was also necessary. If the people in the corporation – shareholders, managers, directors – were not legally liable or relevant, who was? Who would buy and sell businesses’ property, enter contracts of employment and supply, assume liability at law, and so on? Rights and duties do not exist in thin air. They must attach to a legal subject, a person. So, bingo!, the law invented one. By the strangest of legal alchemies it deemed the corporation itself – an abstract set of legal and institutional relations – to be a person (and so it has remained).

What in your view is wrong with the corporate form?


What’s wrong with it is the very thing that makes it so effective in creating financial wealth – namely, its legal and institutional compulsion to take whatever action is necessary to create such wealth for its shareholders, regardless of the consequences to others and the natural environment. Workers, members of the community, children playing in the toxic sludge downriver, or suffering from environmentally-induced birth defects, air, water, animals, trees, oceans, law, morals, social conventions, essentially every being, thing, interest, concern and idea in the world and universe – these are all mere “externalities” for corporations. By law, they cannot be ends in themselves for corporations, but only strategic targets to exploit, or avoid liability for harming, or use for marketing or public relations, in pursuing their self-interested ends. The corporation must always and only act out of self-interest – that is a legal requirement.

What is your take on so-called “corporate social responsibility”?

It is an oxymoron. A corporation has only one responsibility – to serve its and its owners’ financial interests. It is not authorized to act out of responsibility to the social – unless its managers can justify such action as strategies for serving corporate interests, which they sometimes do or can. That calculated and strategic cast defines a quite limited scope for CSR, which should probably better be called “corporate social strategy.”

Corporations do a fine job of doing well by doing a bit of good and then boasting a lot about it. They attract customers in this way and ward off regulators. But to believe we can truly and meaningfully promote and protect social and environmental values by relying on corporations’ strategic sense of when doing some good will serve their interests is profoundly misguided.

The documentary based on your book The Corporation did not touch upon the experience of people working in corporations in the more affluent countries. How does the corporate form impact upon the lives of the relatively privileged?

This is too big a question for this interview. I am currently working on a new book (which will be published by Random House in the UK) and film on children and childhood , mainly in affluent countries, and how they are affected by corporate behaviour. That work will provide a fuller answer to the question.

In general, what I can say here is that the answer to the question you ask depends on which people you are referring to in affluent countries. Many in affluent countries do not share in the affluence, and they, like their brothers and sisters in developing countries, tend to be the hardest hit by the externalities created by corporations, whether in terms of capital flight, environmental degradation, workplace exploitation, union busting, or unsafe and unhealthy consumer products.

The question of exactly how they, and those who are affluent in affluent countries, are affected is, again, too big for this interview. Suffice to say, for the moment, that affluence does not protect one’s kids from BPA in their teething rings.

The documentary presents the example of interface inc. in a very favourable light. Does that example not undermine the thesis of the book?

No, I don’t think so. No one at Interface Inc., including Ray Anderson, will say they are losing money, or prepared to lose money, by taking the course they have. To the contrary, the company is doing quite well, and its green approach to manufacturing and supplying carpet tiles is likely a part of its success.

What the example shows is that it is possible – if you have a smart, creative and committed founder/leader, a customer base responsive to environmental concerns, and a narrowly defined product that can be manufactured and distributed in ways that cause a minimal environmental footprint – to become more sustainable and still make money. As Ray Anderson himself says, this can’t be done with all products – napalm and weapons are examples he gives. We might add tobacco products, pesticides and numerous other toxic chemical products, petrochemicals, fast food, silly financial products (such as repackaged debt), and so on. Some products, by their nature, are not sustainable; others depend upon cheap production, which usually means exploitation of workers and the environment, to be profitable. In a way, Anderson’s Interface is the exception that proves the rule.

It is important to note that Anderson does not see himself as a model. He does not believe the solution to the world’s ills lies with waiting for corporate titans to have epiphanies, as he did, and become enlightened. To the contrary, he says that “someday people like me will be put in jail.” What he means by that is that in the future, the rules governing corporate conduct will be different. We – the public, as a democratic society – will have changed the laws and regulations governing corporations to make plundering the earth illegal. Despite Anderson’s genuine personal efforts to be sustainable at Interface, he does not hold out such voluntary, unusual and private initiative out as a model for change. Public regulation is still necessary, in his view. That, to me, is an important point that some have missed in their interpretation of Anderson’s portrayal in our documentary (and I concede that perhaps we, as filmmakers, could have made this clearer).

What are some first step reforms that would change corporations for the better?

I think – following from what I have just said – that it is us, citizens, who need to take the steps, and the steps we need to take are to reinvigorate and democratize the public regulatory system that has been battered and beaten down by ideology and pressure from big business. Relying on the voluntary initiatives of business people is unlikely to do the trick. As well, reforming the corporate form itself is likely to have limited effect, especially if it leaves corporate managers to interpret and implement broad social and environmental standards that might be written into charters (such as Google’s famous “do no evil” – find me a corporate manager who thinks he or she is doing evil in helping create wealth for shareholders).

What kind of economic system do you advocate?

I am a pragmatist, so I routinely disappoint people on this question. But, just for a moment, I’ll get philosophical and say that the economy and the creation of wealth should not be separate from every other dimension of life and humanity, as they are, by design, within capitalism. The very notion of wealth needs to be broadened out from financial wealth to include human and planetary welfare.

The corporation, as currently constructed, is a manifestation of the belief that societies work best when economic production and financial wealth creation are untethered from all human and reasonable concerns about morals, principles, concern for each other, love, caring, beauty, respect for nature, and so on – essentially all the things that make us human and make life worthwhile.

But such inelegant waxing on my part doesn’t make for a useful suggestion about what to do in the stew we are in, what choices we can make, albeit in conditions not necessarily of our own choosing, that may serve to alter those conditions. So, here’s what I think about that: the ideals and institutions that constitute our extant democracies are quite decent. They are there, there is wide consensus they should be there (though profound disagreement about what they mean and what they should do), and, though short of utopian prescriptions for ideal economic systems, they provide a useful starting place for action.

Markets and the corporation, as an institution, are created, empowered and enforced by the state and governments. As such, their only justification and legitimacy is as tools to serve the public interest and common good. As a starting point, they, through democratic regulatory frameworks, need to be scaled back to that place. And, to accomplish that, we need to start seeing ourselves as citizens with democratic powers and responsibilities to create and govern an economy that nourishes nature and humanity, not as tools for serving the narrow purposes of markets and corporations.