Hon. Maxime Bernier has a long history as a climate change denier

Conservative MP Maxime Bernier (Beauce) raised a lot of eyebrows this week by declaring himself a climate change skeptic in a letter to the Montreal newspaper La Presse (the full English version is here ). In doing so, he also applauded the government's go-slow approach to reducing emissions.

Maxime Bernier has a long history as a climate change denier .
(cyberpresse.ca, Globe and Mail) 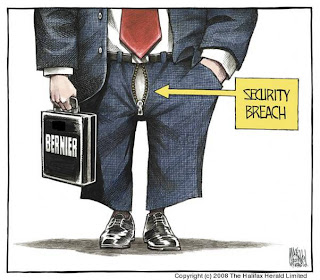 Prior to being an MP, he was associated with the Montreal Economic Institute. In the 2006 election campaign that organization published the only confirmed public response from the Harper Conservatives denying climate science. The MEI opposed the IPCC science and posted a detailed reply to its questionnaire. The Harper Conservatives rejected IPCC science then. Once Stephen Harper became Prime Minister, the IPCC science was removed from the Environment Canada website.

Still, the Harper government hopes Canadians will not learn that their government does not believe that the climate crisis is real. Thanks to Maxime Bernier, maybe more Canadians will realize his views are consistent with those of his boss. Canada's government is alone in the world in denying the climate science.
Posted by Next Year Country